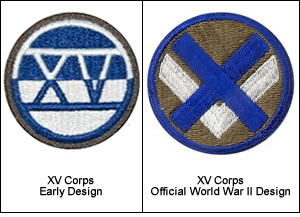 The unofficial early design was approved in October 1933 for the XV Corps of the organized reserves.

The XV Corps was organized and ordered into active service on February 15, 1943 at Camp Beauregard, Louisiana.

After additional training at the California-Arizona Desert Maneuver Area in the summer of 1943, the Corps embarked for the European theater and arrived in England on December 27th, 1943. While in England, the Corps was assigned to the Third Army and prepared for the Cobra phase of Operations on the Continent.

The official World War II shoulder patch worn by the XV Corps was approved by on April 20, 1943. Although the Corps was allocated to the Organized Reserves in 1921, it had no approved official insignia until WW II.

The Roman numerals "X" and "V" make "15" the unit's designation, and the colors blue and white are from the Corps' distinguishing flag. Two pre-war shoulder patches of different design have been attributed to the Corps, but there is no record of these being worn or approved.

The XV Corps was inactivated at the end of World War II. Not long after, however, the XV Corps was again placed on the active list as part of the Army reserves.

It remained as part of the reserves until it was inactivated during Vietnam War budget cuts on March 31, 1968.

Note the back of the patch. The color of the green threads are not the typical OD threads used in other patches. These reproductions appear from time to time on eBay.

A REAL example of the first pattern XV Corps patch.

and the back of the above patch...