VMF-214 "Blacksheep" : How many patch types used during WW2?


29 replies to this topic

I saw a posting from Tom Kibler the other day where he had picked up a group of items from the son of a 214 veteran which included a patch. He did not show the patch but said it was the "good" one. I am wondering how many patches (how many types) were produced worn/during WW2 and which one is the "good" one.

As far as I know, the 214 (as "Blacksheep" not "Swashbucklers") performed three (3) tours. After the first tour they spent a week in Sydney, Australia where I assume the first patches were made.

Is this the Australian made patch (and the "good" one)? ** this does not belong to me **

Then we move on to the one pictured in Millstein's book. This one (to me) also looks foreign made (could be wrong) and he says this one was used during their third and final tour on teh USS Franklin

Then we have the US made version. Is it fair to assume that this version would have only been used by the men of the third tour (which did include some of Boyington's men)

Were there only these three (3) types used during WW2? Any information on the subject would be much appreciated.

Period photo of a guy wearing the US made version of the patch.

This patch is on Fred Losch's G-1 at Seattle's Museum of Flight. it is on loan from Losch's family: 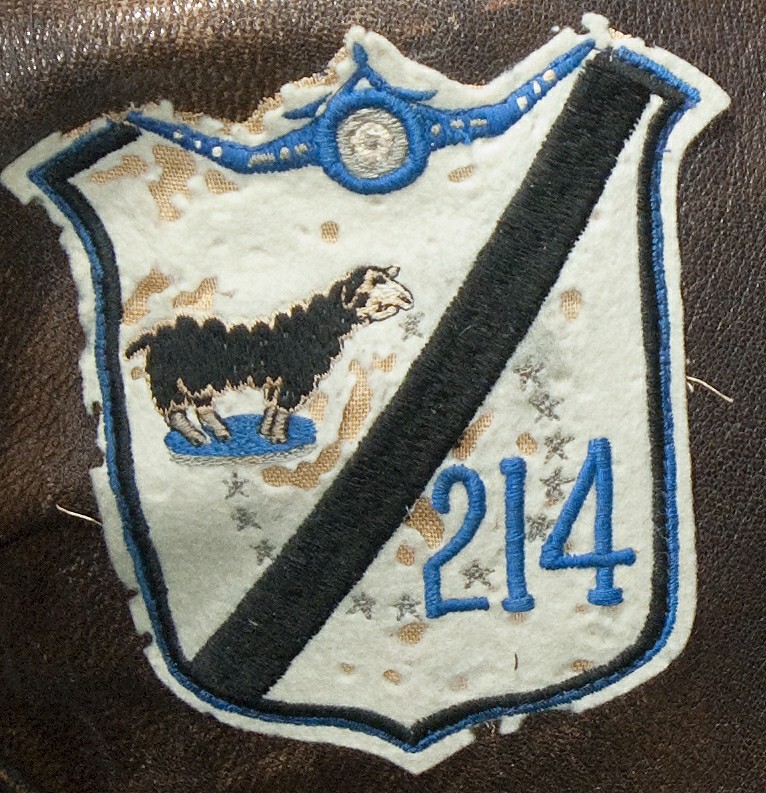 Hello Eric, I think the first patch you have asked about is "the good one". JDK has posted G.L.Bowers' jacket with the same patch as Losch's in the groupings section of this forum: http://www.usmilitar...-vmf-214-items/
Moths apparently prefer the good ones as well. Jeffro

Thank you Jeffro. I appreciate that. Would it be accurate to conclude that these are the three (3) primary patches which were used during WW2, with that Aussie version being the best? I would guess though that any originals from that time period would be good and somewhat difficult to find.

I see these as four variations. The initial patch and Losch's patch are close but have some differences. Look at the blue field the sheep is standing on. The first one has a thin black outline surrounding it - between the grey portion. The embroidery/stitching inside the engine cowling is different as well - though that might be due to heavier wear on Losch's.

Regardless, I see FOUR variants.

67Rally, I think what Eric is asking are the three patches he has shown considered to be the official WW2 design versions of the "Blacksheep" patch. I would have to agree with the three being the 3 known versions from that era. The reasons there are embroidery differences (not major design variations) between the initially posted patch, the Bowers patch and Losch patches are because they are all Australian hand embroidered. Although the Aussies made beautifully embroidered patches staying true to the original design with remarkable detail and consistency, it is not uncommon to see slight variations in the actual embroidery details because they were producing a number of them by hand (and very likely different hands) at that to fill an order. Jeffro

Thanks again to all who responded. Was hoping that more would chime in. Here is an old negative of the patch which is kind of cool. It would be interesting at some point to do a deep dive on this subject as I don't believe one has ever been done and Milstein's book left many questions unanswered.

Hi, Howard,
Do you have a photo of the back of that swashbuckler patch?
thanks,
pat

Hi, Howard,
Do you have a photo of the back of that swashbuckler patch?
thanks,
pat

Sorry Pat, I do not have a photo of the reverse.

If my memory is correct, the piece was Australian made on wool.

Howard, did you happen to have any provenance on the swashbucklers patch? For some reason, I don't get a good vibe from it. It has a strong resemblance to other vintage USMC repros I've seen to include that sort of dusty-looking soiling. The nips around the edges don't look like the typical moth damage and it only occurs around the edges. The embroidery looks a little thick to me as we'll. it is very similar to a VMF122 patch that is on a jacket that was posted by JPStout which I also think strongly resembles Aussie embroidery, but not quite for the same reasons. Not trying to pick any fights here, but I think sometimes the Aussie embroidery is not clearly understood, especially by myself. Perhaps some others can help clarify it for me. Jeffro

Jeffro,
Been alot of water under the bridge since I last had this piece in my possession. Sold it around 1993-94. As I recall, the nips along the edge were from where it was taken off the jacket. (?). It is possible the piece was an early reproduction, I really can't say one way or another. The style of construction was similar to some of the Austrailian made 90th Bomb Group patches I once collected. I'm sure others here on the forum can give more information.
Howard

Dave, pretty rare in my opinion. I've seen 3 over the last year on various auction sites and here. I think the level of rareness would depend on the condition though. The ones I've seen to date are pretty moth damaged. If you have a bead on one, let me know. I'm still looking to add one to my collection. Jeffro

jeffro........thanks for the answer,i was told years ago that being made of virgin wool very few survived.a friend of mine,now deceased had one many years ago he got from boyington,he mounted it on a piece of grey board and had pappy sign it.he had photos of him and pappy at the oshkosh show,with pappy signing it.he later had it framed,i will never know what happened to it but i have no doubt it was his.........dave

Here it is Eric.

This is Lt. Glenn Bowers VMF-214 patch.  One of two he had.  The other was on his khaki jacket, sold in the 80's.  Bowers was in the second tour with the Black Sheep and with the squadron until it was disbanded.  He then went to either VMF-218 or VMF-251 (He went to both, but I am unsure of which one he went to first).  This patch is slightly different than Losch's patch.  The backing appears identical, but there are some minor production differences.  The large black stripe is stitched length-wise, in the same direction as the stripe.  Loch's is stitched perpendicular.  Additionally, there are minor differences in the design of the sheep and plane.  However, I can say with 100% certainty, that this is an identified, authentic WWII produced patch.

This is the jacket Bowers sold (NOT IN MY COLLECTION).  This has been posted before.  This was his other pocket patch.