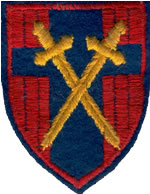 The Twenty-first Army Group was primarily composed of the British and Canadian forces in the United Kingdom that were assigned for the invasion of Europe; however, during its history several U.S. units were assigned to it, including the U.S. 9th Army.

The 21st Group was established in London in July 1943. The Group was an important Allied force in the European Theatre of World War II.

Normandy was a battle of attrition for the British and Canadian armies, sucking in the available German reinforcements around Caen. In the end the Germans lacked the reserves and air protection to prevent the US breakout in early August, 1944 and they were routed.

Advance into Holland
After the successful landings in the south of France by the U.S. 6th Army Group, the 21st Army Group formed the left flank of the three Allied army groups arrayed against German forces in the west. It was therefore responsible for securing the ports upon which Allied supply depended.

By 29th August, the Germans had largely crossed the Seine, but without their heavy equipment. The campaign through Northern France and Belgium was largely a pursuit, with the ports - formally designated "Fortress Towns" - offering only limited opposition to the British 2nd Army. Their facilities were destroyed though. The advance was so rapid, 250 miles in 4 days, that Antwerp was captured on 4th September undefended and with its port facilities intact.

On September 1, the Twenty-first Army Group was relieved of operational control of the United States Armies and these Armies became the chief components of the Twelfth Army Group.

By mid September, elements of the 21st Army Group had reached Holland and halted. Supplies were short. The long haul from Normandy had to be by truck. Ports and railways were unusable. Eisenhower had to choose which line of advance to supply - the Allies could not do it all.

Operation Market Garden
The 21st Army Group then took part in one of the most famous operations in WWII.

After the break-out from Normandy, there were high hopes that the war could be ended in 1944. In order to do so, the last great natural defensive barrier of Germany in the west, the River Rhine had to be crossed. Operation Market Garden was the first attempt to do this. It was staged in the Netherlands with American, Polish and British parachute divisions being dropped to capture bridges over the lower Rhine before they were blown by the Germans. The parachute formations would then be relieved by armoured forces advancing rapidly northwards through Eindhoven and Nijmegen to Arnhem. The north German plain would then be open to the Allies.

However, the armoured formations would have only one road to use - referred to as a "battlefront two tanks wide". Crucial information about the German formations in the area was either missing or ignored and additional German armour was diverted from the Eastern Front. The scratch forces remaining after the retreat from France were much stronger than expected, thus giving the armoured units of British XXX Corps a much tougher fight than had been anticipated, slowing the advance. The American and Polish parachute divisions that had fought south of the Rhine were relieved but the British 1st Airborne Division in Arnhem was destroyed.

Walcheren
An operation was needed to clear the approaches to the great Belgian port of Antwerp and thereby ease the supply problem. The island of Walcheren was strongly held by German forces and commanded the estuary of the Meuse which flows through Antwerp. It was captured in late 1944 by the last major amphibious assault in Europe in WWII. A combination of Canadian forces and Royal Marines undertook the operation.

Battle of the Bulge
After the capture of Walcheren came the last great German offensive of the war. In a repeat of their 1940 attack, German formations smashed through weak Allied lines in the Ardennes in Belgium. However, unlike 1940, the Allies were able to blunt the attack and then destroy the forces that had mounted it.

The Battle of the Bulge presented a command problem to General Eisenhower. It had sliced through US lines, leaving some American formations north and south of the new German salient. However, the headquarters of US 12th Army Group lay to the south, so US forces north of the salient were placed under 21st Army Group. They with US Third Army under General George Patton, reduced the salient.

After the battle, control of U.S. First Army which had been placed under Montgomery's temporary command was returned to Bradley's 12th Army Group. U.S. Ninth Army remained under Montgomery for the final attack into Germany.

Battle for the Roer Triangle
Prior to the Rhineland Campaign the enemy had to be cleared from the Roer Triangle during Operation Blackcock. This large methodical mopping up operation took place between 14 and 27 January 1945. It was not planned to make any deep thrust into the enemy defences or capture large numbers of prisoners. It proceeded from stage to stage almost entirely as planned and was completed with minimal casualties.

The Canadian 1st Army had executed Operation Veritable in difficult conditions from Nijmegen eastwards through the Reichswald Forest then southwards. This was to have been the northern part of a pincer movement with the US Ninth Army moving northwards towards Düsseldorf and Krefeld (Operation Grenade), to clear the west bank of the Rhine north of Cologne. The Americans were delayed by two weeks when the Germans destroyed the Roer dams and flooded the American route of advance. As a result the Canadians engaged and mauled, the German reserves intended to defend the Cologne Plain.

In Operation Plunder, starting on the 13rd March, 1945, the British Second Army and the US Ninth Army crossed the Rhine at various places north of the Ruhr and German resistance in the west quickly crumbled. The Canadian First Army wheeled left and liberated northern Holland, the British Second Army occupied much of north-west Germany and liberated Denmark and the US Ninth Army formed the northern arm of the encirclement of German forces in the Ruhr pocket and on 4 April reverted to Bradley's 12th Army Group.

It was staged in the Netherlands with American, Polish and British parachute divisions being dropped to capture bridges over the lower Rhine before they were blown by the Germans.

The American and Polish parachute divisions that had fought south of the Rhine were relieved but the British 1st Airborne Division in Arnhem was destroyed.

One small correction. In the case of the Poles it was not a division but not full brigade -- 2302 soldiers of 2866 planned for this brigade.