How safe are WWII military watches and compasses REALLY?

I just bought a compass, also have a watch in my collection, came across this article the other day.

Should we be concerned and dispose of all our watches or is keeping a couple in your bedroom nothing to be worried about?

If you ask me personal computers and the magnetic fields we live in aren't much safer, but of course one tries to limit the amount of radiation they're exposed to, especially if it's of the ionizing kind.

Edit: Wikipedia article about the women who painted these things.. https://en.wikipedia...ki/Radium_Girls

There are more chemicals in your water and processed food to injest than to worry about most military items.

I just bought a compass, also have a watch in my collection, came across this article the other day.

Should we be concerned and dispose of all our watches or is keeping a couple in your bedroom nothing to be worried about?

If you ask me personal computers and the magnetic fields we live in aren't much safer, but of course one tries to limit the amount of radiation they're exposed to, especially if it's of the ionizing kind.

Edit: Wikipedia article about the women who painted these things.. https://en.wikipedia...ki/Radium_Girls

Hi Ken88,  twenty-five years or so ago there was a Dutch guy that used to carry out repairs on WWII watches and aviation instruments, less was know at that time about the deadly Radium contained in these items, he worked without gloves or safety equipment.  It is assumed that during his work he would touch or stroke his face, he obviously ingested fine particles of the Radium while breathing, he contracted cancer to one cheek of his face and had to have a large portion of his face cut away to remove the cancerous area, he died from this contact and cancer.

Which brings me to the Luminous discs often associated with WWII US paratroopers, I owned one of these in the 1980's and a friend who worked for the British ministery of defence took mine into the radiation laboratories and checked out the strength of the radiation emitted, he came back with the fact that the disc was highly dangerous due to the large amount and to be in contact with, especially if the Perspex ( plexiglass / acrylic ) cover became cracked. I knew one collecting friend that kept his disc next to his bed in his bedroom.

Here is a link to a site about radiation from these discs and instruments.

In 1987 the family of a Brazilian scrap metal dealer were wiped out from the glowing material they found whilst breaking an old hospital machine, it's believed that many more than sixty-six people were also infected and possibly died as the family travelled by bus to hospital once they became ill.

Having stated all this I still own several WWII watches and wear them daily.

I hope that this information helps your research.

It is a fear I have had with respect to vehicle gauges. These have also caused problems for folks carrying them over the Canada/US border due to radiation detectors.

I am in no case planning on disassembling the watch and compasses that I have but I have kept them in my bedroom where most of my collection has been stored for quite some time now. The Elgin will glow in the dark at night. The paint on the arrow in my Taylor compass broke and fell into the liquid. As Doyler says there are many other things in life that are equally or potentially far more damaging than a small strip of radioactive paint, but perhaps it would be in the best interest of collectors to provide this community with some sound advise? Obviously watches and compasses which are covered in glass will be far less hazardous than say a German field police gorget which has this same type of paint exposed on the surface.

I've done a bit more research on this topic and have found that there are no less than 3 types of radiation this paint will emit: alfa radiation, beta radiation and gamma radiation. Gamma radiation seems to be the one most of us should concern ourselves with as it will travel through matter, including metal and glass casings, sort of like an X-ray. Alfa and beta radiation appear to not pose any risks as long as the watch or other instrument remains intact and unopened. Unless cracked, the casing will stop these types. As you have stated, General Apathy, through the experience of the Dutch repairman, although less effective in traveling through matter, alfa and beta radiation are the real hazard, exposing yourself to that stuff without any protection seems to be a very bad idea. That doesn't mean gamma radiation should be taken lightly. Sure you can't control every unsafe thing in life, but I reckon there are preventive measures one can take, a difference that can be made, to lessen the likelihood of becoming sick because of these items, something along the lines of not wearing these watches or not having one on your nightstand?

So, what's the safe, middle ground here? I'm sure boxing one or two of these watches and burying them in concrete for the sake of safety could be a bridge too far, I mean, we are still collectors. While browsing though I've come across huge collections of WW2 compasses and watches, even on here, which could raise some safety concerns for the collectors who, say, got a tad too enthusiastic.

I am guessing that in any case for most collectors it would better to remove the few compasses and watches they may have out of the bedroom, if that is where they are kept? Disposal perhaps would be an overreaction, many of us are attached to this stuff and there will always be things that are unsafe, from the air inhaled to the food consumed, but where would you draw the line? How many watches or compasses are the limit to store in 1 household/collection and where would be the best place to store them: attic, cellar, anything but your bedroom?

Google 'radium watch dial girls', there is a good Buzzfeed article on their history, and a fair amount on Wikipedia as well.

Yes, very sad story. They told these girls the paint wasn't anything to worry about and made them lick the brushes. Some would even paint their nails and teeth. People would start calling them the 'ghost girls' since their clothes would light up at night. Eventually they got so sick their teeth had to be pulled. One extraction apparently led to a broken jaw which turned a normal roll of film into an X-ray.

Yet the paratrooper luminous discs had warnings saying 'poison' somewhere on the device or storage container.

To illustrate the concern, here is the Elgin I have photographed under a UV-light. This is what they would have looked like back then at night, without the aid of UV. Many veterans who wore these for years have lived long and healthy lives, so perhaps it's blown out of proportion, but they were and still are radioactive in any case. Radium paint has a half life of 1600 years, if your watch has tritium paint, it reduces radioactivity to only about 25 years. 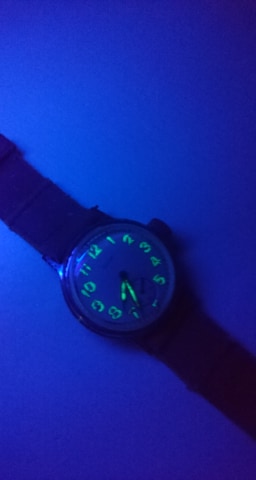 My son began collecting watches a year ago. I told him I would look out for watches at local flea markets. He specifically told me not to buy any watches with radium painted parts. He is an engineer and researches things to extreme depths when he gets interested in something. I trust his recommendations explicitly. Knowledgeable watch collectors will not buy these, they are still considered dangerous.