8 Variations of the 9th Corps Badge 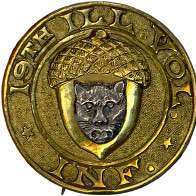