Military Order of the Carabao 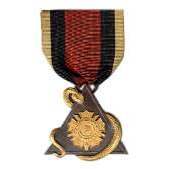 By KevinBeyer,
May 31, 2020 in VETERANS' ORGANIZATIONS