BDUs... 1 is an Army Submariner, 1 is a Navy Airborne Troop 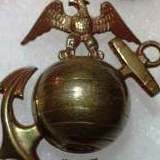 By shrapneldude,
January 9, 2012 in CAMOUFLAGE UNIFORMS