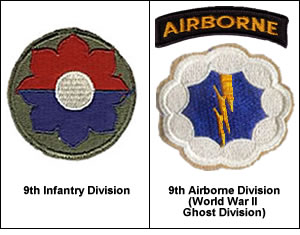 PATCH HISTORY: [Infantry]
The OCTOFOIL is a device that dates back to the 15th Century when it was customary for each son to have an individual mark of distinction. Under the rules of heraldry there are eight foils or positions. Heraldic rules gave the OCTOFOIL to the ninth son, a device symbolic of his being surrounded by eight brothers.

The 9th Infantry Division insignia is a red and blue octofoil; a design of eight petals with a white center. Red and blue designate colors of an infantry division headquarters flag; white is for the numbers used in divisional flags. The circular background is olive drab. The subdued variant consists of olive drab and black for less visibility to be worn on field uniforms.

Constituted 8 July 1918 in the Regular Army as Headquarters 9th Division.

Reconstituted 24 March 1923 in the Regular Army as Headquarters, 9th Division.

The 9th Infantry Division ("Old Reliable") saw no action in World War I.

The 9th Airborne Division was a phantom division, or ghost division, created in 1943 by the US Army in order to deceive the Germans into believing a large Allied forces was to invade Europe elsewhere, rather than Normandy.

Then, in World War II, it was constituted 1 August 1940 at Fort Bragg, NC. And deployed overseas 11 December 1942 to invade North Africa, where advanced elements of the division landed 8 November 1942.

It pushed through Tunisia into Bizerte, which fell May 1943. The division then landed at Palermo in Sicily that August and was later sent to England for the impending cross-channel invasion of France.

The 9th Division landed in Normandy 10 June 1944, cutting off the Cotentin Pensinsula and assisting in the capture of fortified Cherbourg. In July the division participated in the breakthrough at St.-Lo and swept across northern France. It held defensive positions near the Roer River from December 1944, through January 1945, then crossed the Rhine at Remagen Bridge 7 March 1945, pushing into the German Harz Mountains.

The division was inactivated, but reactivated 15 July 1947 at Fort Dix, NJ. Serving some 15 years before being inactivated once more.

On 1 February 1966, however, the division was re-raised at Fort Riley, KS. And sent to III Corps Tactical Zone of Vietnam. The division swept through Dinh Tuong Province 6 January-31 May 1967 in Operation PALM BEACH, spending February and March with South Vietnamese forces combating the enemy in Long An Province.

Meanwhile one of its brigades was selected to fulfill the concept of a Mobile Riverine Force created in 1967 And integrated with a Navy Task Force 117 at each level of its brigades command. For the first time since the Civil War, when Union Army forces operated on the Mississippi, Cumberland and other rivers, the U.S. Army was utilizing an amphibious force operating entirely afloat.

The force was a complete package, independent of fixed support embarked or in tow. The troops lived on barracks ships docked at the mobile riverine anchorage. On tactical operations Navy armored troop carrier boats, preceded by minesweeping craft and escorted by armored boats (monitors) transported the soldiers along the vast waterways in the Delta. The first element of the Mobile Riverine Force (2nd Brigade) arrived in Vietnam in January 1967 and after shakedown training in the Rung Sat swamps moved into a base near My Tho, which was named Dong Tam a base on a 600-acre island created among inundated rice paddies by dredging earth from the bottom of the Mekong River.

The MRF often operated with other specialized units such as Navy Seal teams, South Vietnamese Marines, units of the ARVN 7th Division and River Assault Groups on reconnaissance blocking and pursuit operations. In 1968 the 9th Infantry Division engaged in bitter fighting in the Siagon area, General Westmoreland stated after TET that the 9th Infantry Division and The Mobile Riverine Force saved the Delta. And in 1969 operated throughout the IV Corps Tactical Zone.

Two brigades were deployed to Hawaii as part of the U.S. withdrawal. The 3rd Brigade stayed in Vietnam (and also fought in Cambodia) until October 1970. Elements of the 9th Infantry Division served 1,440 days in Vietnam.

Here's my 9th ID Greenback. It appears to be unfinished (?). Opinions welcome!!!!
Andrew

AAA-O stands for "Anything, Anywhere, Anytime bar nothing" The 39th Infantry Regiment's slogan they adopted in Sicily 1944.

Another German made variation.

Having served in the 9th ID for 2 1/2 years we had a special name for that patch. I'm sure some of you have heard it before. Interesting there are so many versions of it.

Ever see one like this? On type III poplin Jungle fatige shirt~

Two pre-WWII variations.  Interesting that the trimmed down one was worn like that.

Some theater made bullion examples.