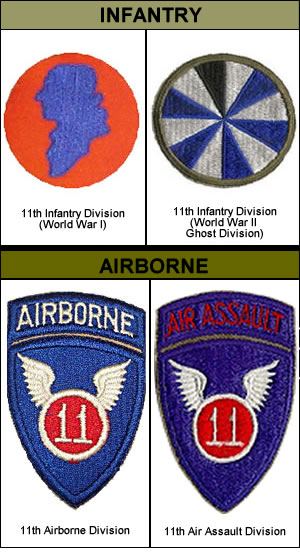 Known as the Lafayette Division. Insignia, a silhouette bust of Lafayette in blue, superimposed on a red disc.

Organized at Camp Meade, Maryland, in August, 1918. The 17th Infantry, on duty in the Southern Department, and the 63d Infantry, stationed at Presidio, San Francisco, California, and certain detachments for special units were ordered to Camp Meade to form a nucleus around which the 11th Division was to be formed. There were taken from each company of these two regiments certain non-commissioned officers and privates who were assigned to the 71st and 72nd Infantry Regiments to start their organization. The 24th Field Artillery Brigade was trained at West Point, Kentucky, and never actually joined the division at Camp Meade.

Major General Jesse McI. Carter commanded the division from the time it was organized until demobilization.

The 11th Airborne Division of the US Army was activated on the 25 February 1943.

Landing
The 11th Airborne Division arrived in New Guinea, 25 May 1944, and continued training, leaving for the Philippines 11 November 1944. It landed amphibiously, not by jump, on Leyte, 18 November 1944, between Abuyog and Tarragona (now MacArthur), 40 miles south of Tacloban, and pushing inland, cleared the Ormoc-Burauen supply trail, an important Japanese combat lifeline. The 11th's general mission was to seize and secure within its zone all exits from the mountains into Leyte Valley and to secure the western exits from the mountains into the west coastal corridor to assist the attack of the 7th Division toward Ormoc.


The Enemy
On 6 December 1944 the paratroopers of the 11th found themselves fighting Japanese parachutists who had landed near the San Pablo airstrip. The Japanese were wiped out in a 5-day engagement. In a continuous series of combat actions, Japanese resistance was reduced on Leyte by the end of December 1944. Heavy resistance was met at Rock Hill, which finally fell, 18 December; a sleeping enemy was caught off guard at Hacksaw Hill, 23 December, and suffered heavy losses. During January 1945 the Division rested and staged for a landing on Luzon. While other American troops were driving on Manila from the north, the 11th Airborne made an amphibious landing 60 miles south of Manila, 31 January 1945, at Nasugbu, and began to drive north.


Jumps
The first combat jump by an element of the division in the war, that of the 511th Parachute Infantry Regiment on Tagaytay Ridge, 3 February 1945, met no resistance. The 511th crossed the Parañaque River 5 February, and reached Manila, meeting fierce Japanese resistance. Nichols Field was taken, 12 February, and Fort McKinley was flanked, 12-16 February, and finally taken, 17 February. A combined air and sea assault liberated more than 2,000 American and European interned nationals at Los Baños, 23 February 1945. With Manila declared secure, the Division reduced a strong ring of enemy outposts between Lake Taal and Laguna de Bay, and occupied towns along Highway No. 1, cutting off the Bicol Peninsula. In April the 11th took part in clearing out remaining enemy resistance in Batangas province, and by 1 May, all resistance in southern Luzon had ended.


Final Mission
The final operation of the Division was conducted on 23 June 1945, in conjunction with the advance of the 37th Division in northern Luzon. A Task Force was formed and jumped on Camalaniugan Airfield, south of Aparri. The force attacked and made contact with the 37th Infantry Division, 26 June 1945, between Alcala and the Paret River. In July 1945 the Division trained; in August it was transported by air to Honshu, Japan, via Okinawa, for occupation duty.

Air Assault Division Insignia. After occupation duty in Japan, the division returned to Camp Campbell in Kentucky in 1949. Its mission became that of a training division, during which time they helped train the Army Reserve 100th Airborne Division. In 1950, the division participated in a training exercise called "Swarmer" at Fort Bragg, North Carolina where resupply techniques were perfected, the results of which were used during the Korean Conflict. During the Korean War, the division's 187th Regimental Combat Team was sent to Korea where it conducted two combat jumps. To fill the void left by the 187th's departure, the 188th Glider Infantry Regiment was activated in August 1950, the only Glider Infantry Regiment to make a glider attack in the Pacific War. Upon reactivation, the regiment was redesignated a parachute infantry regiment. Additionally, the 503rd Parachute Infantry Regiment was reactivated to complete the division's strength.

Ironically, the 24th's contingency Airborne Brigade was activated 16 July 1958, and sent to Beirut, Lebanon, as part of President Dwight D. Eisenhower's move to prevent the loss of Lebanon to the newly emerging United Arab Republic. The division headquarters were officially inactivated in July of 1958 at Fort Campbell, Kentucky.

The division's was briefly reactivated in 1963 at Fort Benning, Georgia, as the 11th Air Assault Division (Test). The division's mission was to test the concept of helicopter assault tactics. Those two years would mark the division's final mission. The division was inactivated for the final time in 1965 when it's headquarters transferred to the 1st Cavalry Division (Airmobile). It's legacy is perpetuated in the form of the 101st Airborne Division (Air Assault), especially that division's 3rd Brigade Combat Teamformerly the 187th Parachute Infantry Regiment, of which only two battalions remain.

some variations one us made one rare german made

A great self explanatory image of The Angels shoulder patch Augsburg West Germany circa 1956.