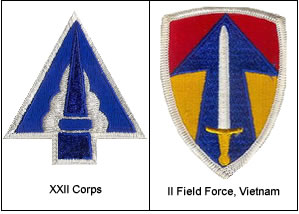 Constituted 9 January 1944 in the Army of the United States as Headquarters and Headquarters Company, XXII Corps.

The XXII Corps (22nd Corps) was a corps of the United States Army during World War II and the Cold War, and as II Field Force, Vietnam, the Vietnam War.

The XXII Corps was activated on January 15, 1944, at Camp Campbell, Kentucky, and changed station to Fort Dupont, Delaware, before embarking for the European Theater in November of 1944.

The shoulder patch worn by the XXII Corps was approved on April 16th, 1944, and the device on the patch is a pheon which is representative of power and srength. The colors blue and white are from the Corps' distinguishing flag.

Following the end of World War II, XXII Corps remained in Germany on occupation duty. Then, on January 20, 1946 in Germany, XXII was inactivated.

The XXII Corps remained inactive for nearly twenty years until it was finally reactivated on January 10, 1966. When reactivated at Ft. Hood, Texas, in January 1966, the command received its new name, II Field Force.

Activated on March 15, 1966, it became the largest corps command in Vietnam and one of the largest in Army history. II Field Force was assigned the lineage of the U.S. XXII Corps, a World War II corps in the European Theater of Operations. II Field Force was a component of U.S. Military Assistance Command Vietnam (MACV) and had its headquarters in Long Binh.

II Field Force controlled units participating in the 1968 Tet Offensive and the 1970 Cambodian Incursion. II Field Force was de-activated on May 2, 1971, during the withdrawal of U.S. ground combat forces from Vietnam, with its assets providing the basis for its successor, Third Regional Assistance Command (TRAC).

Notice how the top of the spike is not visible in the patch on the right side.