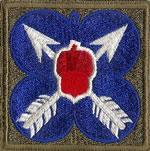 The shoulder patch worn by the XXl Corps was approved by the OMG on April 3, 1944. The crossed arrows represent the fighting power of the Corps, and the acorn is a symbol of strength, while the four-leaf clover is a sign for good fortune. The blue and white portions of the insignia suggest the colors of the Corps' distinguishing flag.

The XXI Corps was activated on December 6, 1943, at Camp Polk, Louisiana, and was responsible for training an estimated 200,000 men and 70 different units of varying sizes before it embarked for the European Theater in November of 1944.

After a short stay in England, the Corps landed in France and became operational on January 13, 1945, after being assigned to the Seventh Army. The XXI was assigned position along the left flank of Seventh Army near the Maginot Line and gathered strength for an attack south of the Colmar Canal during the last week in January.

The XXI Corps returned to Seventh Army control on February 16th and moved to Morhange two days later to begin a limited offensive. Extremely heavy resistance was encountered in capturing Forbach and Stiring-Wendal, and Corps elements of the 70th Division and 101st Cavalry Group reached the Saar River on March 14th.

Launching an attack into the Siegfried Line, the men of the XXI broke through and crossed the Saar to take Saarbrucken on March 20th, and the Corps arrived in the Bitche sector two days later. Corps troops crossed the Rhine River at Neuschloss and Mannhein on the 28th and 29th of March and attacked east into Germany towards Wurzburg and Schweinfurt.

The Seventh Army attack turned south, and Corps elements of the 12th Armored Division captured Laucheim and Bopfingen against light resistance and then captured a bridgehead across the Danube River at Dillingen the following day. The XXI captured Landsberg and crossed into Austria with the direction of the main advance aiming towards Innsbruck and the Brenner Pass. Elements of the XXI Corps attacked the area of the National Redoubt on April 30th and ended any possible German last-ditch defense in the Bavarian Alps.

The following day, Corps troops captured Bad Tolz, moved toward the Watchen See, cleared Oberarnmergau, and advanced southwest up the Inn River Valley where German Army Group G surrendered on May 6, 1945, as the fighting in Europe came to a close.

After a short period of occupation duties, the XXI was inactivated on September 30, 1945, at Swabish Gmund, Germany, after having participated in three campaigns.

Following World War II, the XXI Corps again became part of the reserves. It continued to serve this function until it was officially inactivated on June 5, 1970.

Machine embroidered with OD and Army green backgound and a postwar handmade variant, probably German made.