8 replies to this topic 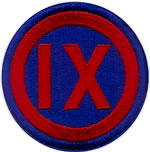 The U.S. IX Corps was a corps of the United States Army which served in World War II and throughout the Cold War. In time throughout its history it has been known as IX Army Corps, and is the foundation for both the U.S. 9th Theater Support Command at Camp Zama, Japan, and the U.S. 9th Regional Readiness Command at Fort Shafter, Hawaii, of the U.S. Army Reserve.

The IX Corps was initially organized in November 1918 at Ligny-en-Barrois, France right before the ceasation of hostilities in World War I.

The IX Army Corps was activated at Fort Lewis, Washington, on June 1, 1940. In July 1941, the corps assumed operational responsibility for the Camp Murray Staging Area.

This was in addition to the normal training functions of the Corps. After the Japanese bombing of Pearl Harbor on December 7, 1941, IX Army Corps was assigned the mission of supporting defensive operations along the central and northern regions of America's western seaboard.

On September 1, 1943, the unit was redesignated IX Corps and a year later, September 25, 1944, IX Corps closed its headquarters at Fort McPherson, Georgia, preparatory to overseas movement to Hawaii.

Upon arrival, IX Corps was assigned to Tenth Army with a dual mission of developing an overall plan for the invasion of the Japanese-held coast of China, and the preparation of all Tenth Army units on Hawaii for movement to Okinawa.

With establishment of an overall command of Pacific Forces under General MacArthur, IX Corps moved to Leyte, Philippine islands, in July 1945 and was assigned to the Sixth Army. There, it began planning for the initial invasion of Kyushu, Japan and later, occupation of Japan in case the Japanese collapsed or surrendered.

In October 1945, following the surrender of the Japanese military forces, IX Corps came ashore and established a headquarters at Sapporo.

During the occupation of Japan, U.S. IX-Corps was headquartered at Sendai, Japan and commanded the 1st Calvary Division and the 7th Infantry Division. It was deactivated during the downsizing reorganization of occupation forces on 28 March 1950.

With the outbreak of the Korean War, IX-Corps was reactivated at Fort Sheridan, IL, on 10 August 1950, with personnel from 5th Army Headquarters. IX-Corps staff and support units arrived in Korea on 22 September 1950 and became operational on 23 September 1950 when it assumed command of the U.S. 2nd and 25th Divisions.

By the time the Korean War was over, IX Corps played an essential role in major army operations, such as Vulture, Clam-up, Tune-up, Mushroom, and Showroom - all of which were designed to limit Invading Communist manpower and equipment.

On January 1, 1954, Headquarters and Headquarters Company, IX Corps, was relieved from assignment to Eighth Army and assigned to Far East United States Army Forces. Camp Sendai was Headquarters XVI and then IX Corps during the 1950s. On February 2, 1956, IX Corps moved from mainland Japan to Fort Buckner, Okinawa, where it merged with Headquarters Ryukyus Command, to form HQ RYCOM/IX Corps on January 1, 1957.

On May 15, 1972, IX Corps once again returned to mainland Japan where it merged with HQ, U.S. Army Japan, to form HQ USARJ/IX Corps, fulfilling a contingency planning mission which includes periodic participation in joint and combined forces Command Post Exercises in the Western Pacific.

In 1961, IX Corps became a separate headquarters of U.S. Army Pacific. The 9th Regional Support Command [9th RSC] in Hawaii was designated HQ IX Corps (Augmentation) and was organized on January 16, 1962. At that time it was an integral part of the active Army's IX Corps, and participated in command post exercises with the corps for its annual training.

When IX Corps was deactivated, the 9th Theater Army Area Command was activated in its place in Japan.

Here is an Interwar felt 9th Corps. The front.