10 replies to this topic

Hey everyone, Im usually not one to post twice but this anniversary snuck up on me and its a day I take very personally.

Today marks 75 years since my own g grandfather was shot through his legs, barely surviving the small but crucial battle in the town known as Selestat, France

After a lengthy and freezing campaign throughout the Vosges hills in Southern France, the 36th and 103rd IDs came upon a critical German supply hub keeping the German 19th Army stuck in the Colmar Pocket alive, this hub was Selestat. Being occupied by the German 706th Volksgrenadier and 716th Infanterie Divisions, the town was heavily defended as a crucial necessity in keeping the 19th operational. Delmer and his company, along with the rest of the 3rd Battalion, 142nd, were sent in to attack the Southern part of the town on December 2nd, 1944. I companys job was to force entry through a German roadblock manned by enemy infantry and an operational 88mm gun. Advancing with two M10 GMCs and an M4 Sherman, the attack group came into trouble when the 88 quickly knocked out their armor support. Instead of retreating, the infantry took advantage of the assault and quickly overran the German positions, taking out the gun and securing an entrance into the city.

The fighting in Selestat became some of the harshest urban combat the division would ever see, as the streets were fought over building to building with booby traps and machine gun nests dotting every path. In the afternoon of the 2nd, Delmer and his platoon were sent ahead to scout a nearby square when they suddenly came under fire from a German MG42 team holed up in a building at the far end of the opening. Pinned down and unable to move, the platoon CO desperately called out for someone to warn the others of the impending ambush. Delmer volunteered for this responsibility, ran out from his cover clutching his rifle to his chest, and was targeted by the machine gun. Running horizontally to their position, one round from the MG entered the side of his right leg and came out the side of his left one bullet making four holes. Delmer laid on the street but was pulled into safety and eventually evacuated. As for the rest of the battle, the elements of the 36th and 103rd would continue to fight and defend Selestat for nearly three weeks as German forces desperately sought to resupply their men in the Colmar. The siege would eventually be broken and Selestat would once again be free after four years of German rule.

Delmer made a full recovery after spending 75 days in the hospital recovering from his wounds. He suffered severe lacerations in his legs but the bullet managed to miss any major nerves or arteries. He eventually rejoined the company on February 16th and continued fighting with them until the end of the war.

Around 5 years ago I was helping my grandfather clean out his garage when all of a sudden we stumbled upon an old Ike jacket, stripped, in a garbage bag lying under some boxes. I was always interested in history but really had no idea what this was. When he told me it probably belonged to my great grandfather, the spark struck. We continued cleaning the garage and his basement and over the course of a few months found this amazing grouping which all belonged to his dad, my great grandfather, PFC Delmer C. Koonter.

My g grandfather, Delmer, lived in Williamston, Michigan with his wife and my two-year old grandfather. The son of German immigrants, Delmer was a 31 year-old farmer when his draft notice came and he stepped out to serve his country. Arriving in Italy at the tail end of the fighting, Delmer would not see action until being assigned as a replacement to the 36th immediately following the landings in Southern France. As a replacement but older rifleman in i company, he earned the nickname gramps and would serve with i company until the end of the war.

These items are by far my most prized possessions and will stay in my family for hopefully centuries to come. My most recent find was the Vmail in my g grandmothers scrapbook and reading through them, knowing their historical context, I nearly tear up every time I see them. Knowing the terrible conditions he and the 36th had went through, the little soldier boy message written to my young grandfather really means so much more when you realize he was writing it in a field hospital after coming so close to death this cold day in southern France, being shot through the legs with four holes, all missing major arteries. I hope you all enjoy the story and artifacts from my relative, as they are what truly inspired me to take upon the hobby which we all sharepreserving the history of Americas heroes. Without his sacrifice I wouldnt be the man I am today and for that I am thankful. Today means a lot more to me than the beginning of finals here at school, it represents the beginning of my strongest passion.


Much of this information I got on my own through intensive research of the battle in company and regimental records, however I want to thank Matt LeMasters for his wonderful work in pulling my grandfathers files from the national archives which confirmed my research and Juerg Herzig for his great article on the battle at standwheretheyfought.jimdo.com , he compiled some great current photos of the sites my grandfather fought over and provided a complete context of the many actions going on around the town.

Most of his grouping 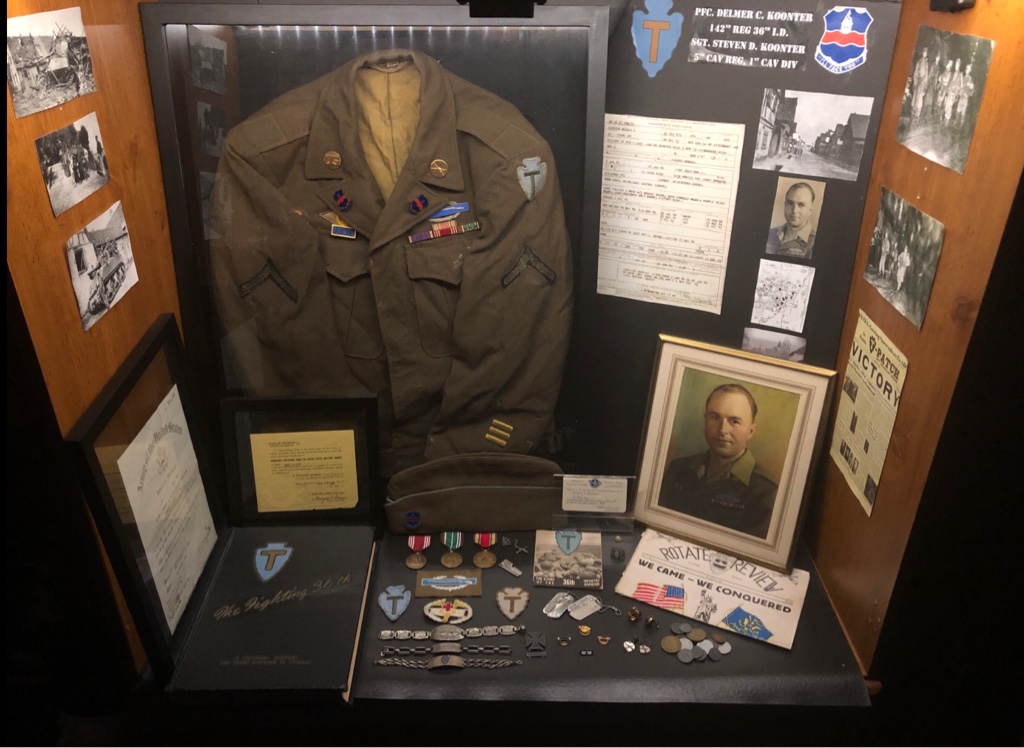 Message written on the back of the photo

I also have the original coffin box and case 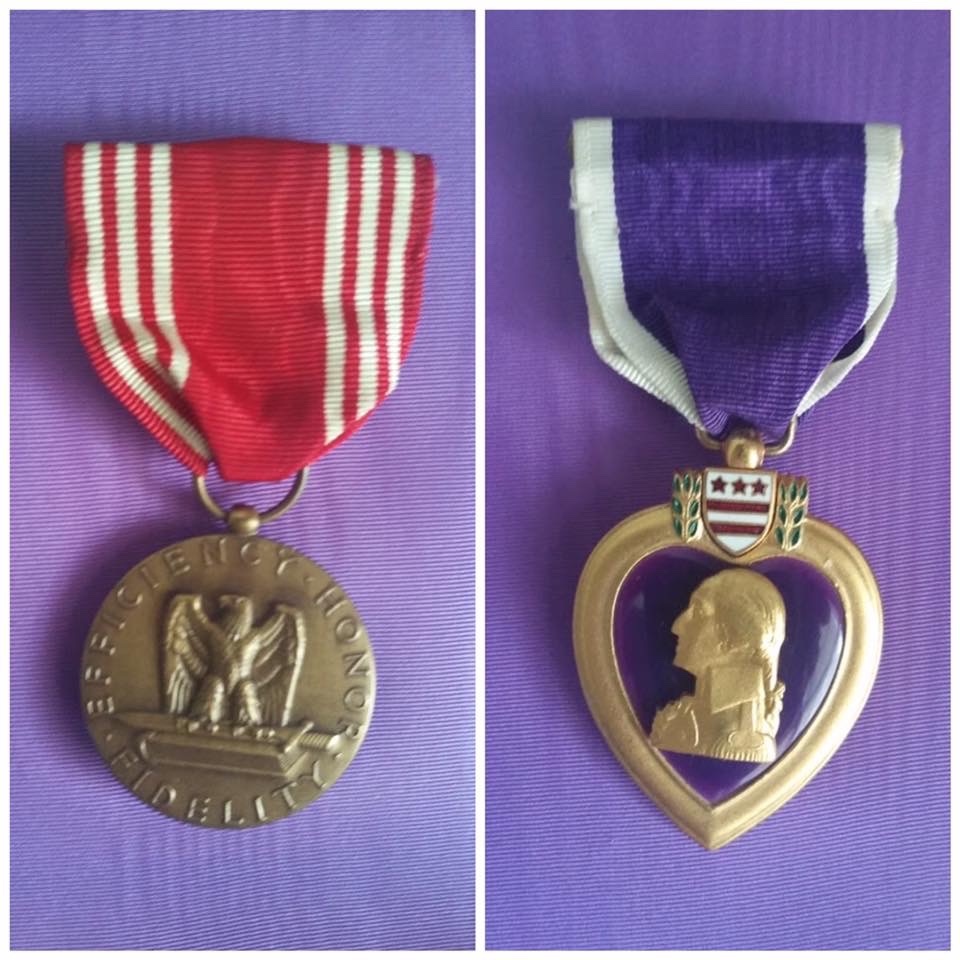 The roadblock taken by his company

Scars of the battle remain today, the slit shows one of many places that would have been scattered with hidden German MG nests

Company Records of the day pulled by Matt 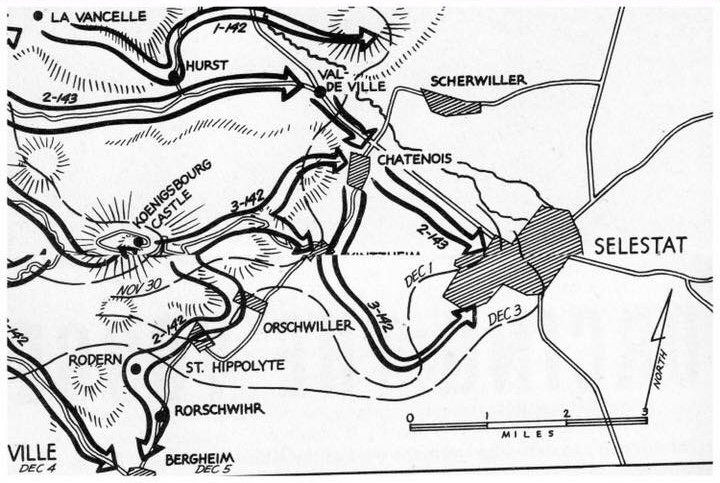 Photos of the men 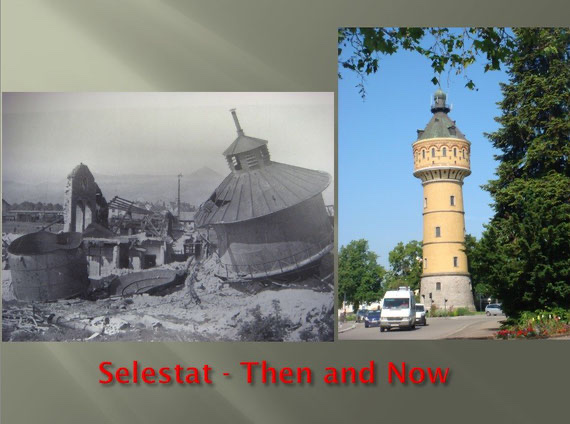 Here are some updated photos of the items he brought back 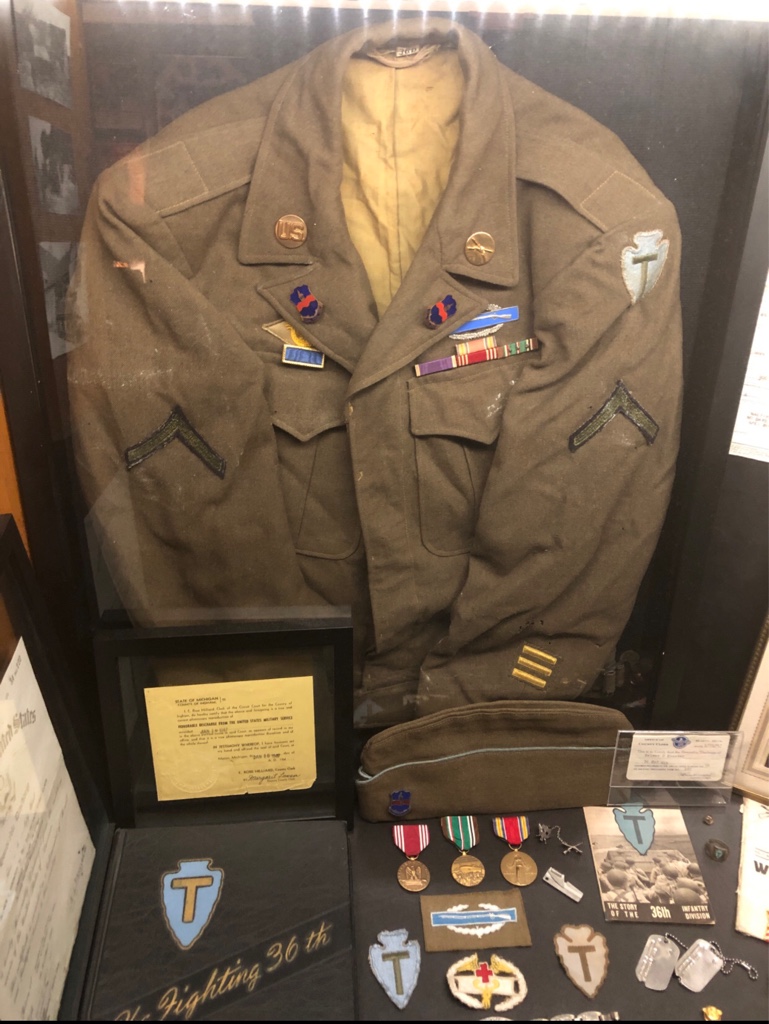 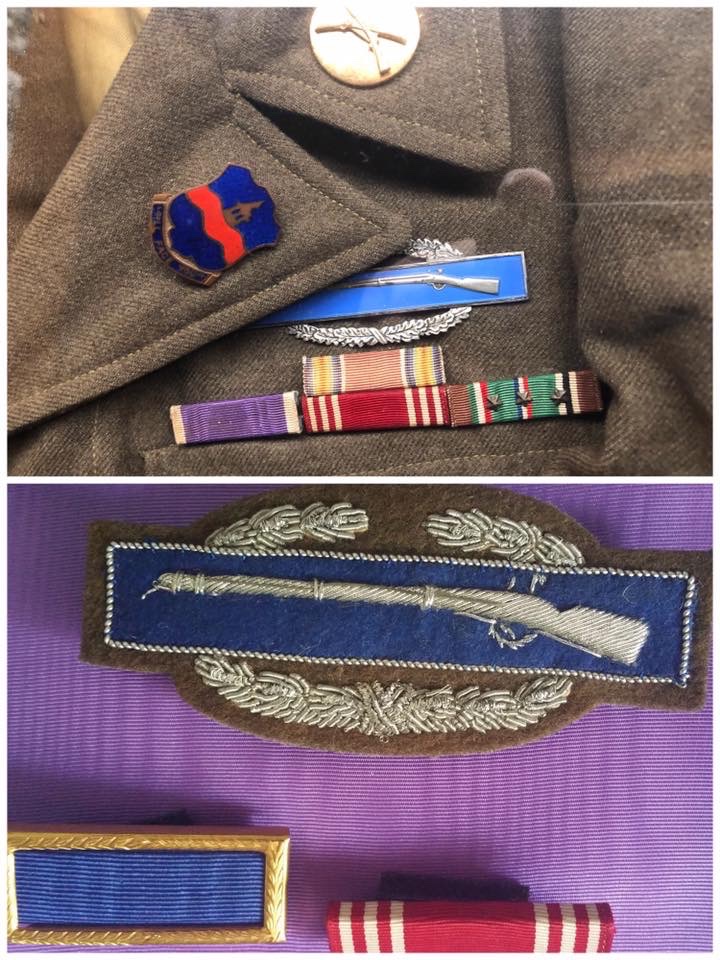 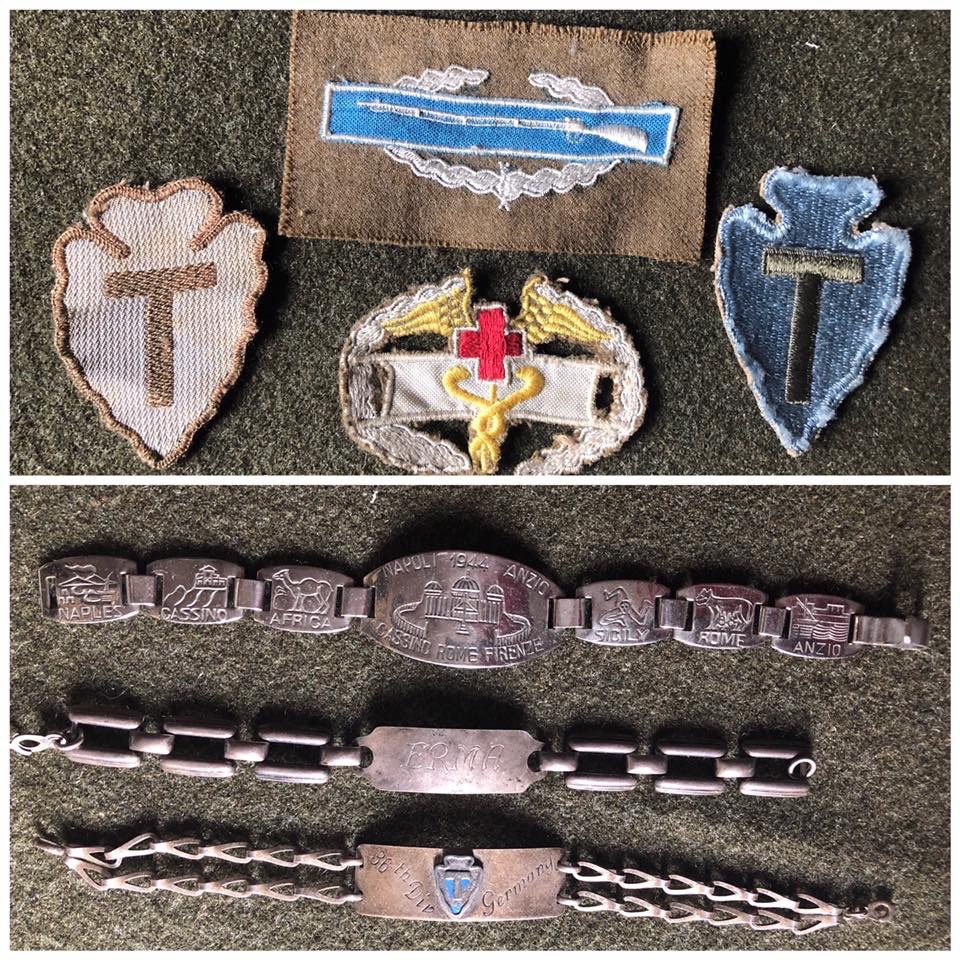 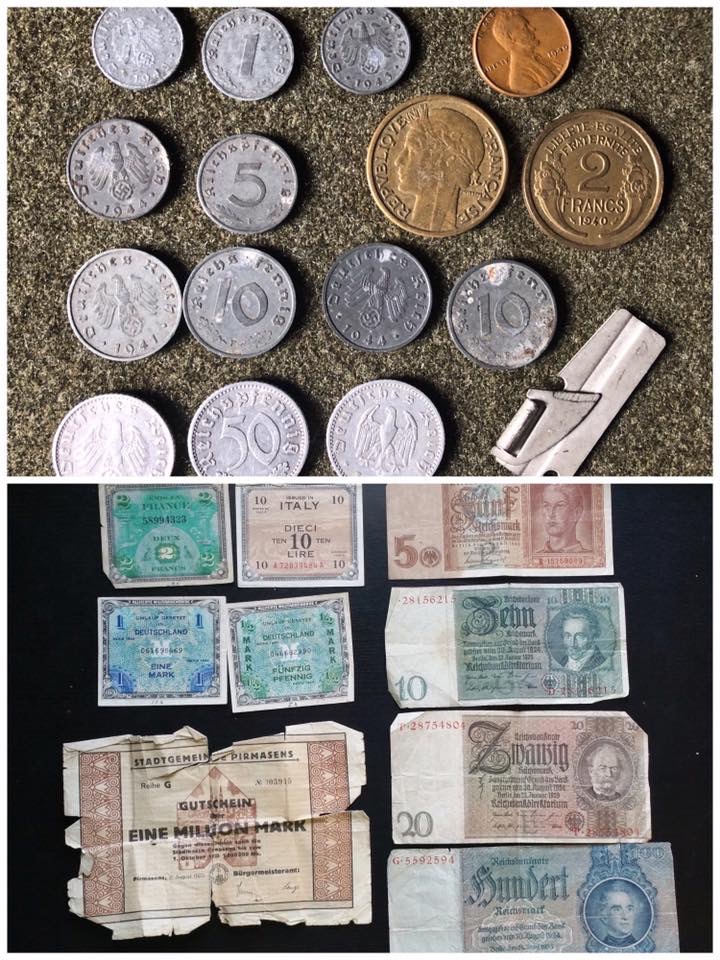 My favorite of his letters 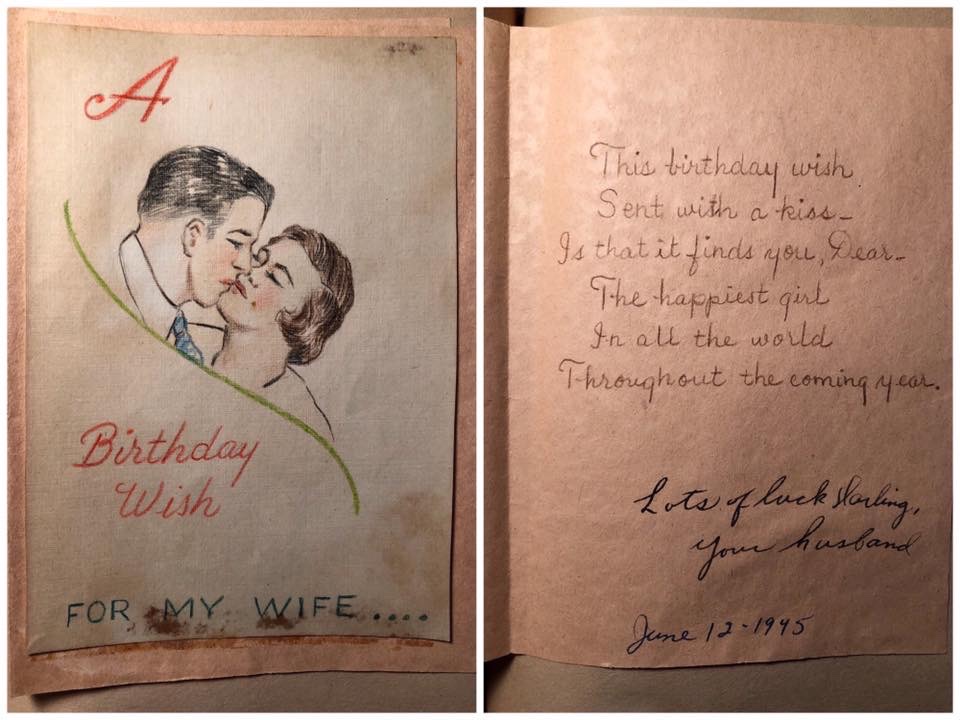 The only other photo I have of him overseas is from his first Donkey ride on March 12th, 1945 near Hochholden. He is on the white one. The other photo shows him with my grandfather, his son, a day or two after he returned home on a visit to their favorite fishing spot

And one last photo I forgot

Amazing grouping Alex, I never get tired of seeing this grouping. I absolutely love the medic insignia!

Thanks man! Also admins, I am also not sure why the apostrophe in the title messed up but if it’s possible to remove the weird characters I would appreciate it.

What a great group and a wonderful tribute to your great grandfather. The photos are great. I like the one showing the 5 soldiers - just a perfect depiction of what it was really like - a dirty, lousy, freezing mess. They were the greatest generation.

Very nice, my museum is not far from Williamston at all. Great to see some of our Michigan history out there.   Scott

Wow- it is great that you have all of that.....it is a great feeling to preserve history, especially with a family connection.

A really nice tribute to your Great-Grandfather!