Has anyone ever seen this exact combination - yellow base, black number - before?
Just a Hail Mary to see if it can be narrowed down to a specific unit, or ROTC group, American Legion/VFW/ Marine Corps League. 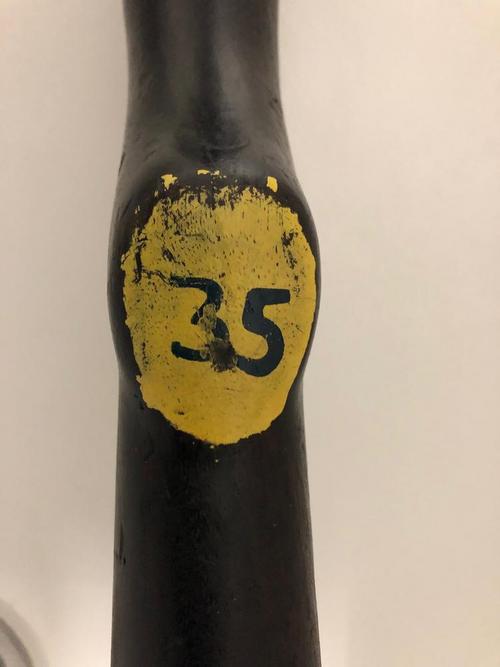 could be a rack number

That would be my guess also, pretty high number for a Legion/VFW post, usually limited to 20 or less per post, and most posts to about 10 rifles.

Is the rifle import marked, or from the CMP, if you know?

Coincidentally I have a photo of a Marine taken in what is now North Korea just prior to when the Chinese came rolling over the border during the Korean War. In that photo, he is holding a loaded M1 Carbine cocked at just the right angle showing a rack number in the exact same location as your Garand. Definitely a rack number and I guess the type of thing some Marine units did.

Here is the thread where I showed the image back in 2010:

Thanks for the responses, gentlemen.

By way of backbrief, I posted the same question over on the CMP forums and did some searching.

1) Most of the guys who reported rack numbers on Garand stock heels seem to have WW2 dated weapons (1943 was mentioned a few times).

2) The CMP had similarly marked stocks for sale, one guy bought a pallet-load of them and after keeping what he wanted parceled out the others.

3) The consensus is that the color indicates the platoon, as the numbers generally were less-than-40.

4) One opinion was that it was a National Guard thing.

Conclusion - it's part of the weapon's history, I'll leave it unmolested.

Is the rifle import marked, or from the CMP, if you know?

I've had several of those that came on CMP rifles and every one was a Greek return.  I've had a couple that were stenciled on the upper hand guard that were more than likely U.S. rack numbers.  I don't have them any longer or I would post a photo of what they looked like.  After the war we sent thousands of rifles around the world and a lot of those have come back via the CMP.  The Greek returns hit around the 90's if I remember correctly.  Not saying yours isn't some type of U.S. marking but just be aware the Greeks marked their stocks that way.

A 2013 Big 5 M-1 purchase had a a light blue heel with what looks like red numbering. Aug 44 dated receiver with a 51 dated barrel. I believe at this time Century Arms was importing some South Korean Garands and I believe 3069890 was one of them.