27 replies to this topic

In the name of the President of the United States, the Commanding General, Fleet Marine Force, Pacific, tales pleasure in awarding the SILVER STAR MEDAL to George Van Conkelberge. United States Marine Corps:

“For conspicuous gallantry and intrepidity in action against the enemy while serving as a machine gun squad leader in a Marine rifle company on IWO JIMA, VOLCANIC ISLANDS, on February 28th, 1945. During an assault by his company on HILL 362, the platoon to which Corporal VAN CONKELBERGE’s machine-gun squad was attached was ordered to the aid of another platoon pinned down at the base of the hill by automatic fire that swept and dominated the area. After moving forward fifty yards his platoon was also pinned down to such an extent that no movement could be made forward, and effective fire could not be brought to bear upon the enemy. On his own initiative and without orders, he slowly worked his way forward approximately fifty yards through withering rifle and automatic fire to a position from which he could observe two caves, and from this exposed position he discovered that the enemy’s automatic fire was coming from these caves. Returning to his squad, he slowly moved his machine gun forward to the same position approximately fifty yards forward of the frontlines from which he fired point-blank into the caves, silencing the enemy gun. At this time he came under heavy enemy rifle fire and was wounded. His courageous action so inspired those around him that his gun was quickly turned on the other cave, forcing the enemy’s gun into silence. As a result of his action, the company was able to resume its attack, which resulted in the capture of strategic HILL 362. His cool courage, absolute disregard for his own personal safety and inspiring leadership were in keeping with the highest traditions of the United States Naval Service.”

His casualty card would shed light on his wounds. He was shot through the back and the bullet went straight through, exiting out of his chest.

The medals, uniform, ribbons, and extra ribbons, as well an overseas cap and a ton of ties all came with the grouping

I put everything on the best I could as far as all the pinholes I could find. The leather belt and khaki dress shirt are not his as his belt was unfortunately missing the buckle.

The original owner puts a year-long add in the local paper and lives near CONKELBERGE’s grandson. The grandson called and passed it over to him. Always amazed at what’s out there! This Marine was truly a selfless hero

What's really neat is that Tatum and Van Conkelberge directly trained under Guadalcanal hero and Medal Of Honor recipient John Basilone. Basilone would be Tatum and Conkelberge’s platoon sergeant for a long while until Company C, 27th Marines needed one and Basilone was transferred. Tatum goes on to talk about Van Conkelberge as “Van” a ton more in the book as they were extremely close as mentioned!

What I thought was really significant was the fact that Tatum actually writes out the exact act that got Van Conkelberge his Silver Star Medal from another perspective and how Tatum was involved. When Van Conkelberge and their buddy Steve moved up, Conkelberge took out the first cave with his machine gun and was immediately shot in the right side of the back and the bullet exited out of his front left shoulder. Steve would be less fortunate receiving 2 gunshot wounds to the gut. In seeing his two best friends down on the ground and knowing japs would kill them both, Tatum sprinted up and grabbed Van’s gun and took out the second cave, resulting in him receiving a bronze star. (His citation is in the pictures).

Steve gave a thumbs up on his way out on the stretcher but Chuck said they knew it was bad. Chuck requested to go with his two buddies but the Sgt. Denied it telling him they needed all the manpower they could find.

Later on, when Tatum went to see Van Conkelberge in Hawaii Van gave Tatum the news that he had been afraid of; Steve died of his wounds. To change the subject Van asked how Iwo went after he was evacuated. He then told Chuck he’d be returning soon to get ready for whatever was next. Trying to add humor to a dark time, Van said, “One thing about being in a hospital: plenty of time to play cards”.

Tatum said he got off a plane in the later 80s and went into the town of Taft, California where Conkelberge was from. Chuck knew Conkelberge owned a bar there and went into the back room of the bar where a bunch old men were playing cards. Chuck asked which one was George to which he got a reply, “He’s dead”. Conkelberge had lectured Tatum about chain smoking on Iwo that was what got George in the end. He ended up died of lung cancer from smoking two packs a day.

Tatum’s account with Basilone is portrayed in the famed series “The Pacific” produced by Tom Hanks and Steven Spielberg. If Conkelberge had not missed d-day he would have fought with Basilone.

When I purchased the grouping I was unaware of this connection but it definitely made my day. 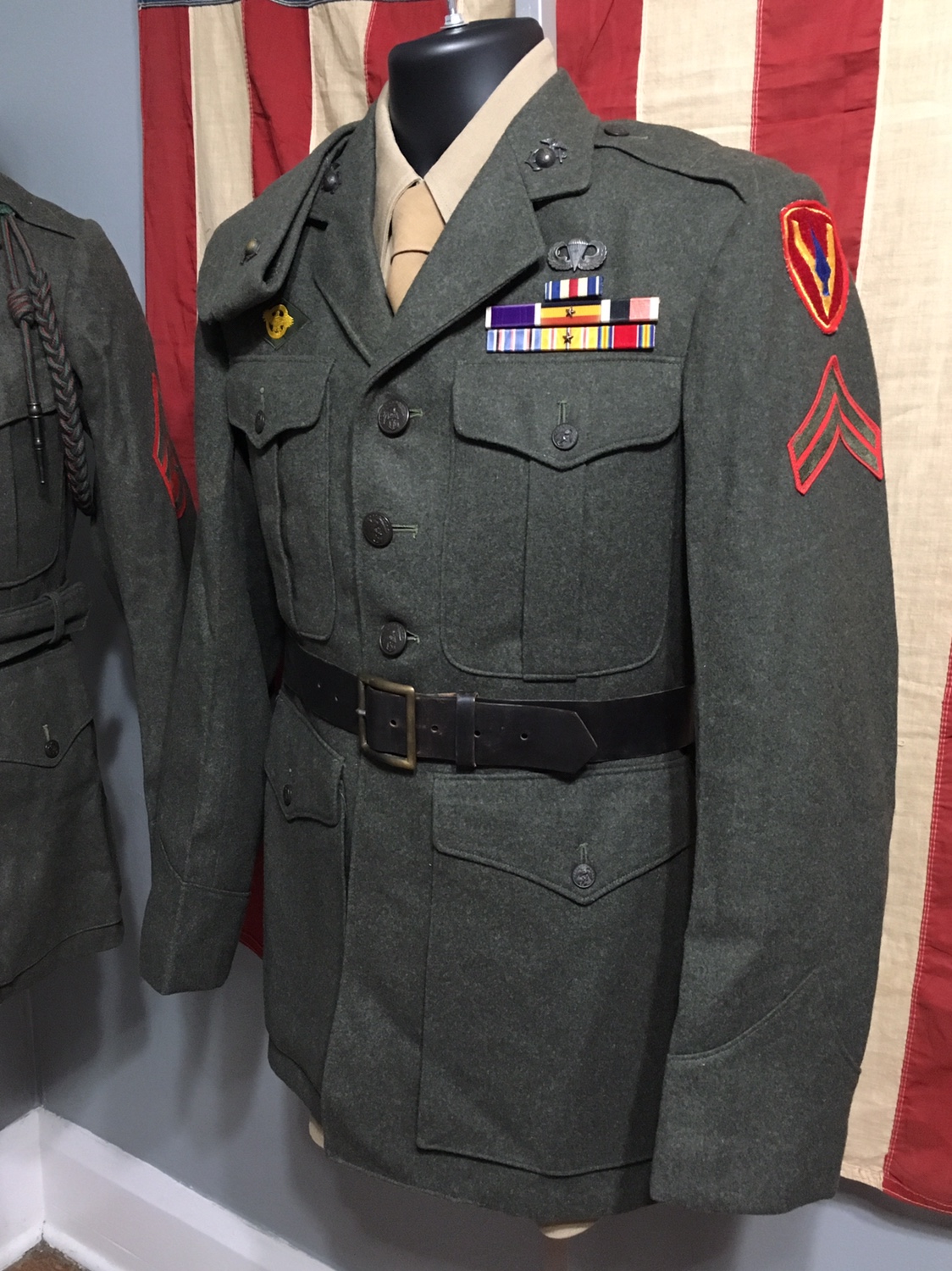 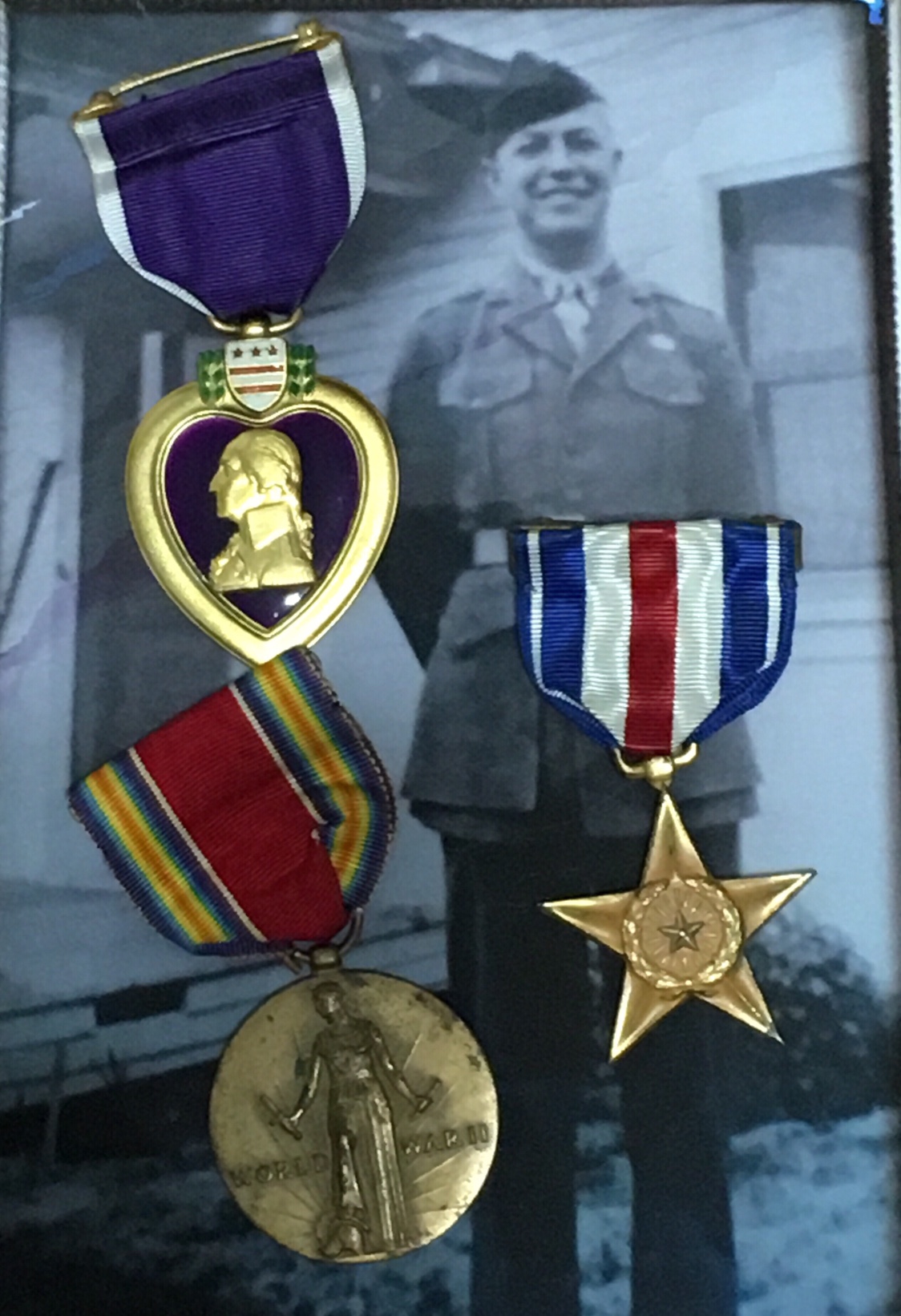 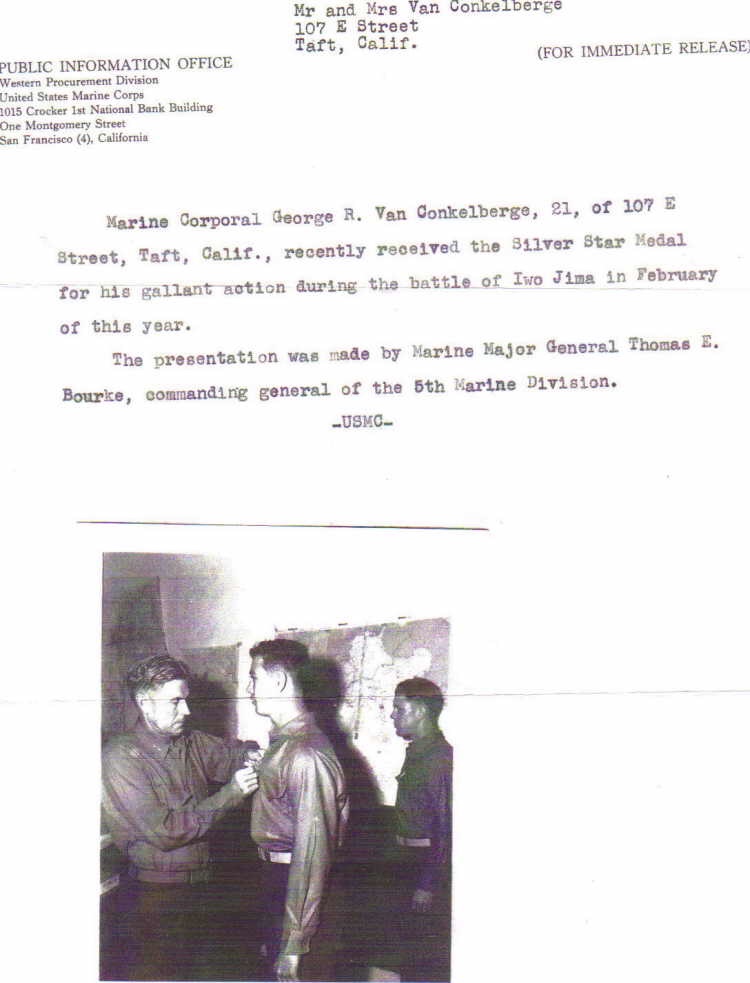 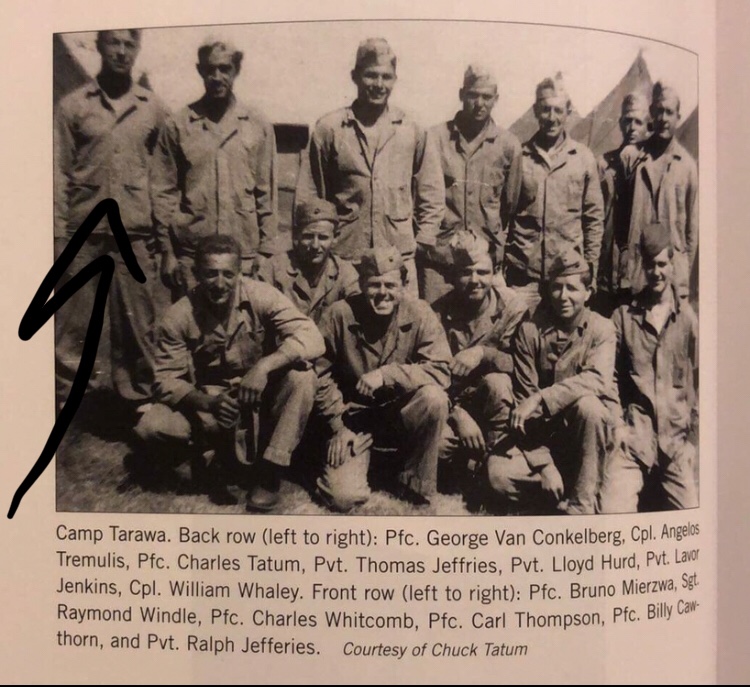 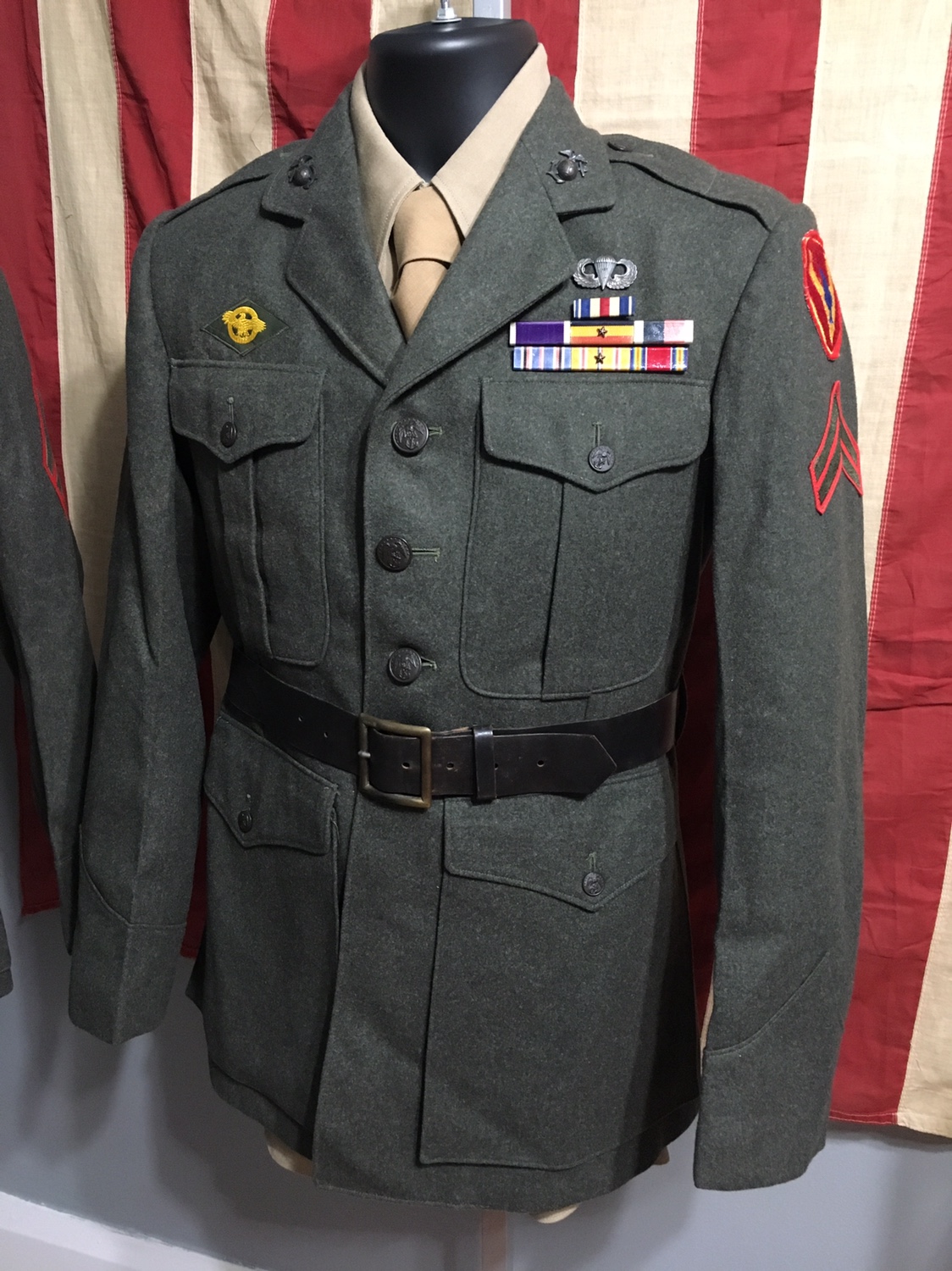 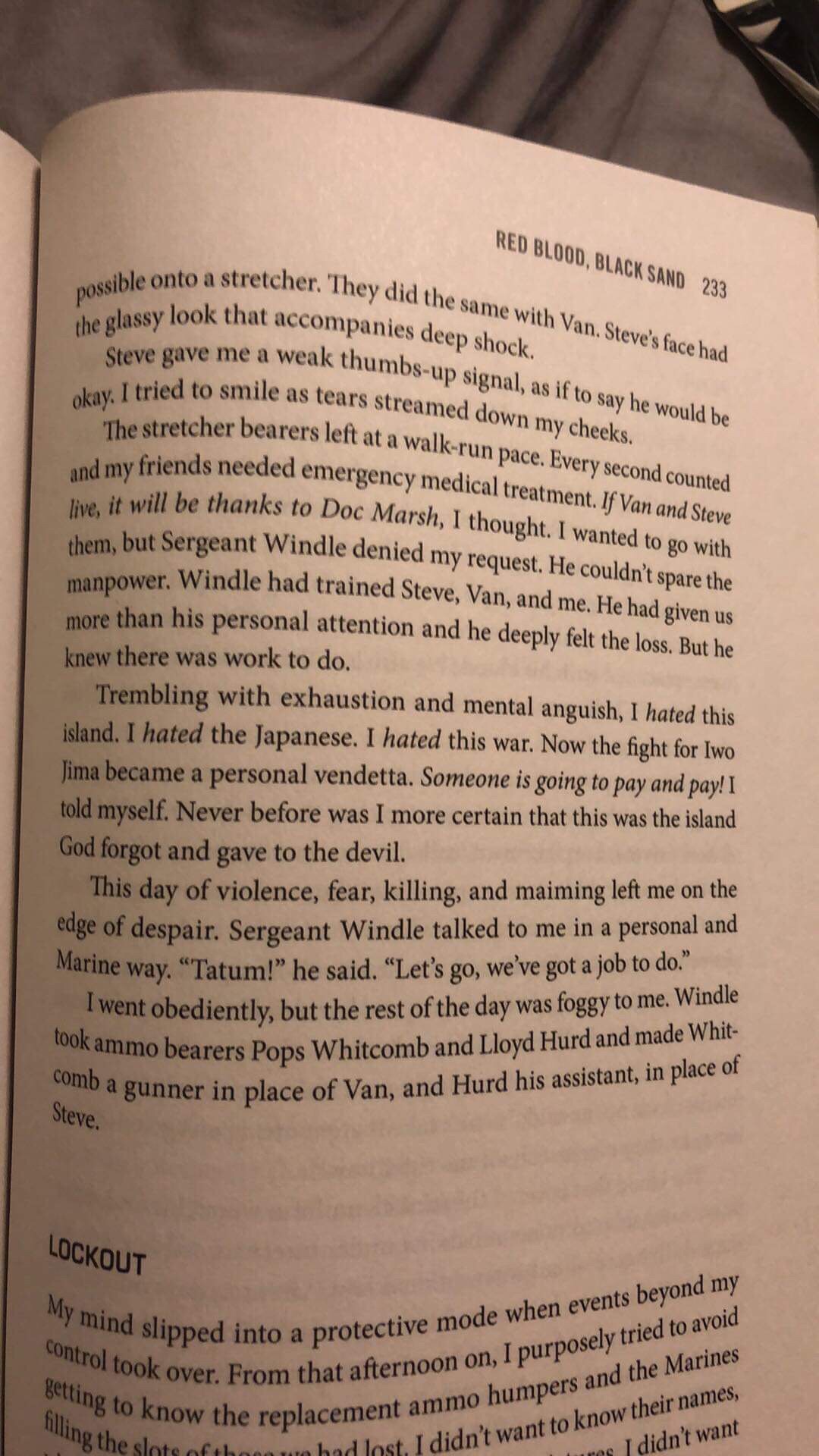 Gulp! That is a fantastic grouping, thanks for sharing. Would be a center piece in a WWII Marine collection. Kevin

Gulp! That is a fantastic grouping, thanks for sharing. Would be a center piece in a WWII Marine collection. Kevin


Much appreciated Kevin! Definitely a centerpiece

and thanks for the read!

and thanks for the read!


Least I could do!

Excellent group! If you want another neat historical connection - there was a cab driver named William Whaley, a NC recipient at Iwo Jima, who as a taxi driver drove Lee Harvey Oswald to his rooming house after the JFK assassination. Could be your guys squad leader.

Excellent group! If you want another neat historical connection - there was a cab driver named William Whaley, a NC recipient at Iwo Jima, who as a taxi driver drove Lee Harvey Oswald to his rooming house after the JFK assassination. Could be your guys squad leader.


Thanks! Real lucky to have it

Killer grouping! Groups like this you don't see often!

Killer grouping! Groups like this you don't see often!

More than happy to share it! Incredible when you can get an insight on these guys from someone that knew them as well as Tatum knew Van.

That is an exceptional grouping, congrats!

That is an exceptional grouping, congrats!

Very nice! a great addition to your Iwo collection.

Unbelievable grouping to a brave Marine.  Wow, talk about a center piece!

Very nice! a great addition to your Iwo collection.


Thata definitely been more of my focus. Very happy to have it!

Unbelievable grouping to a brave Marine.  Wow, talk about a center piece!


It very much so is! I have a few others that are up there but this one is super neat and his story is out there in writing which is always huge!