How To: Repair Fiberglass Damage on an M1 Liner


2 replies to this topic

About a month ago, I picked up a 1953 Micarta liner that was totally shot. All that was left was a bit of the nape strap suspension, some half-broken off rusted A-washers, rivets, and that was pretty much it. Wanting an M1 I could wear driving my Jeep, if I ever want to reenact, etc., I decided this would be a good candidate for restoration to WWII configuration to pair with a recently and poorly repainted front seam swivel bail shell I picked up.

After doing a little research on how to restore a liner, I set about drilling out the rivets. Things went alright, some of them I drilled out and got out easily, some of them I drilled and would not budge, and some I just failed to get the bit to bite on. At that point I broke out a Dremel and ground away what I needed to, and got everything out with only minimal scuffing which will be covered by the washers and suspension.

That is, until I got to the front rivet below the insignia hole. I had been using a piece of scrap wood as backing on the outside of the shell while drilling the rivets, but on this one, either the fiberglass was weakened by how rusted the rivet was or I simply was not holding the scrap wood firmly enough against it. When I started drilling, the bit went through the rivet and out the back right away, but unfortunately it took about a circular centimeter of fiberglass with it. I sat there kind of stupefied, thinking I had just ruined the liner, wasted my money, and condemned a piece of history (even if it was a trashed postwar liner) to never being returned to its glory.

After a bit of consideration, I decided that given my experience building a stitch-and-glue fiberglass/plywood boat, I could take a shot at repairing the liner to still accept a new suspension. Since someone else may have this same issue or receive a trashed liner with serious fiberglass damage, I thought I would do a write-up so you can achieve similar results.

To begin with, here are some pictures of the liner as I received it so nobody will think I wrecked a good liner. You can see how nasty the front rivet is, which in hindsight probably was a good indicator this would go the way it went: 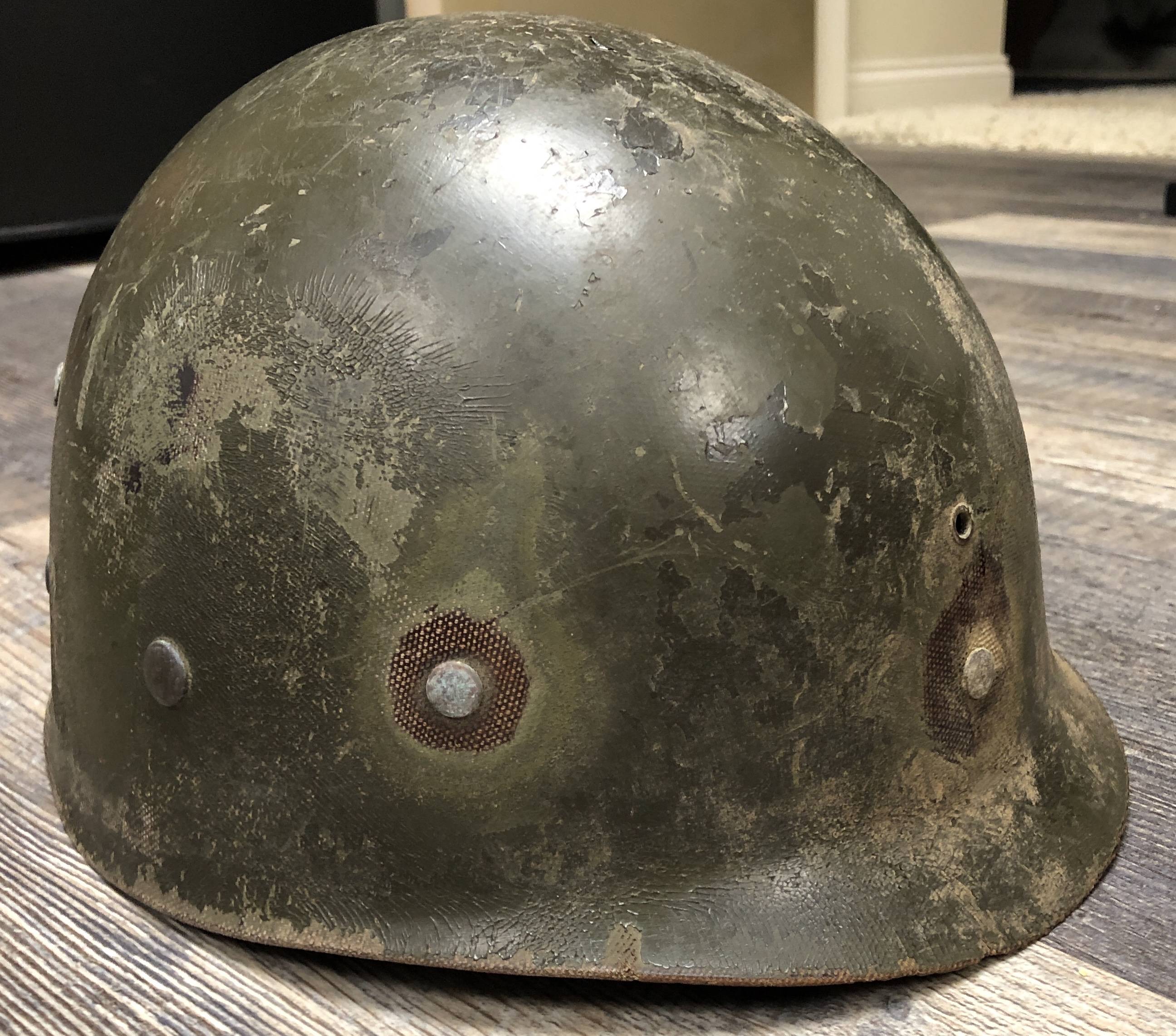 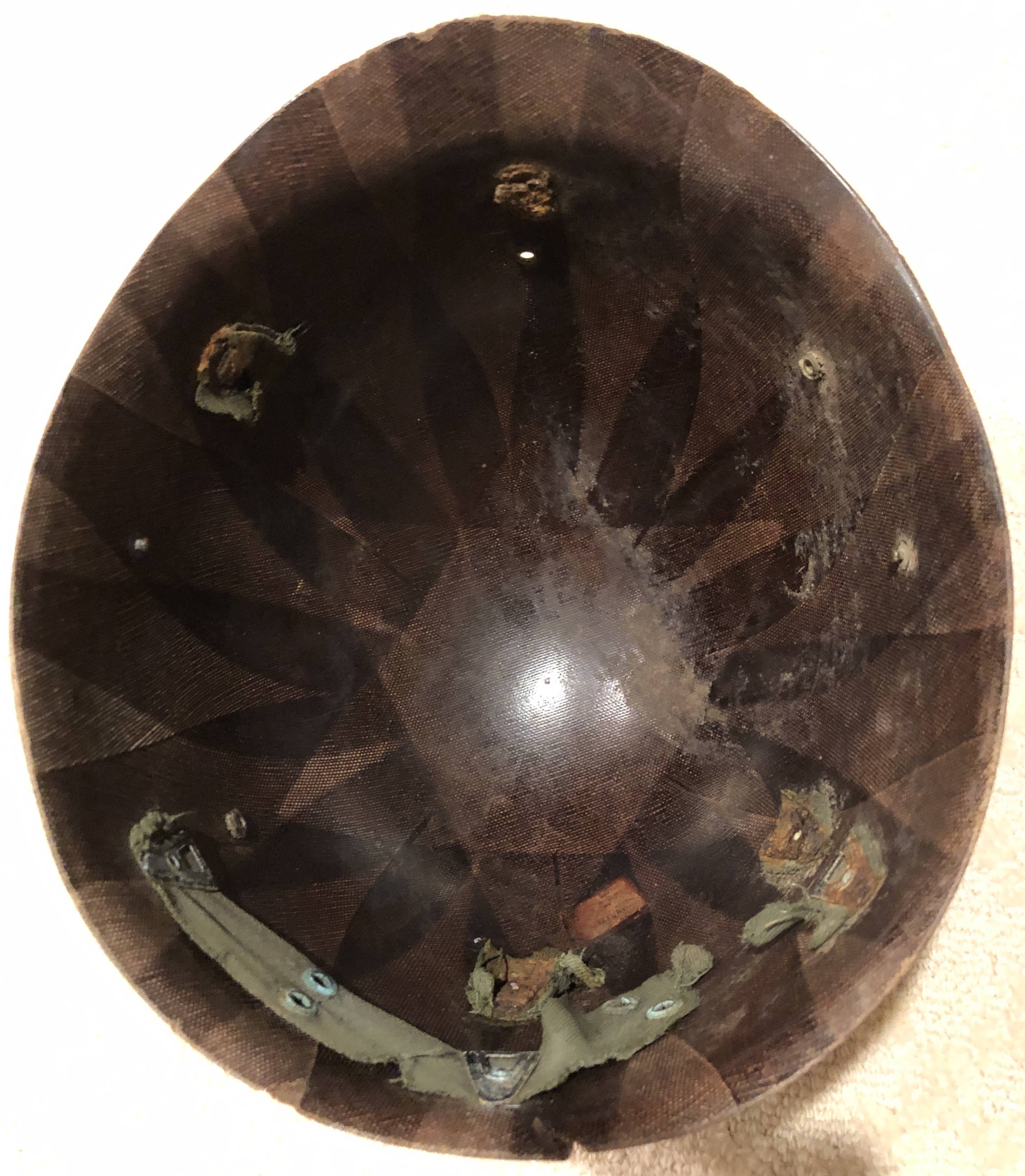 The carnage following the break: 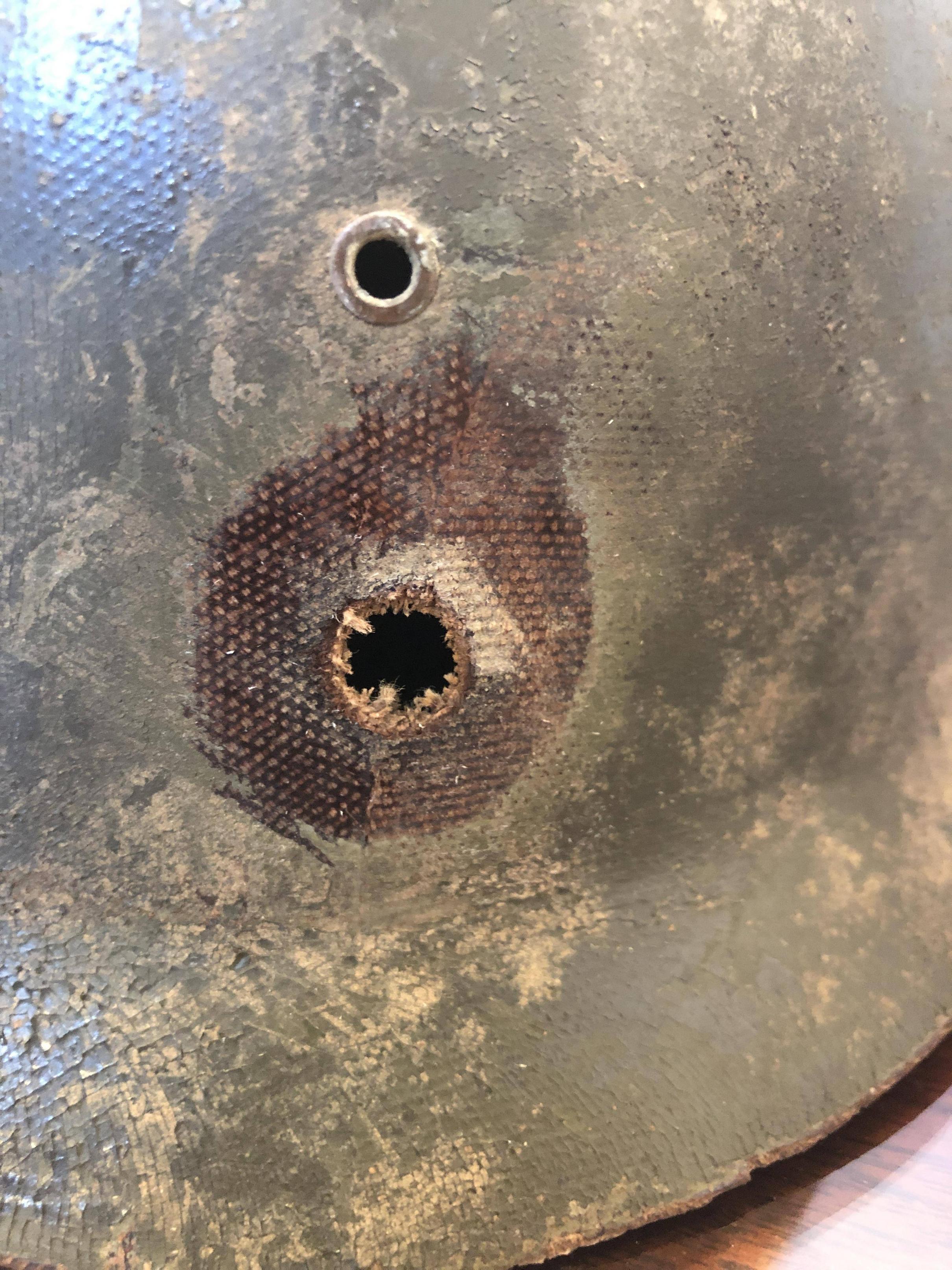 My first attempt at repairing it was to just mix up some two-part JB Weld from one of those little syringe kits and fill the hole, using wax paper as backing (wax paper is one of the only things epoxy will not stick to, so make sure you use it for backing and protecting the rest of the liner). In hindsight, I should have recognized that the hole was too big for epoxy alone to be sufficient, because it needs the structural support of fiberglass to really be a good repair. Nonetheless I first tried it this way, and left it to cure for about two weeks when I went away. The epoxy was old and had been used before, so this might have been part of the problem, but it never got truly hard or firm, so when I got back, I cleaned off the epoxy and decided to do it properly. Here is a picture of my first attempt, showing the wax paper trick: 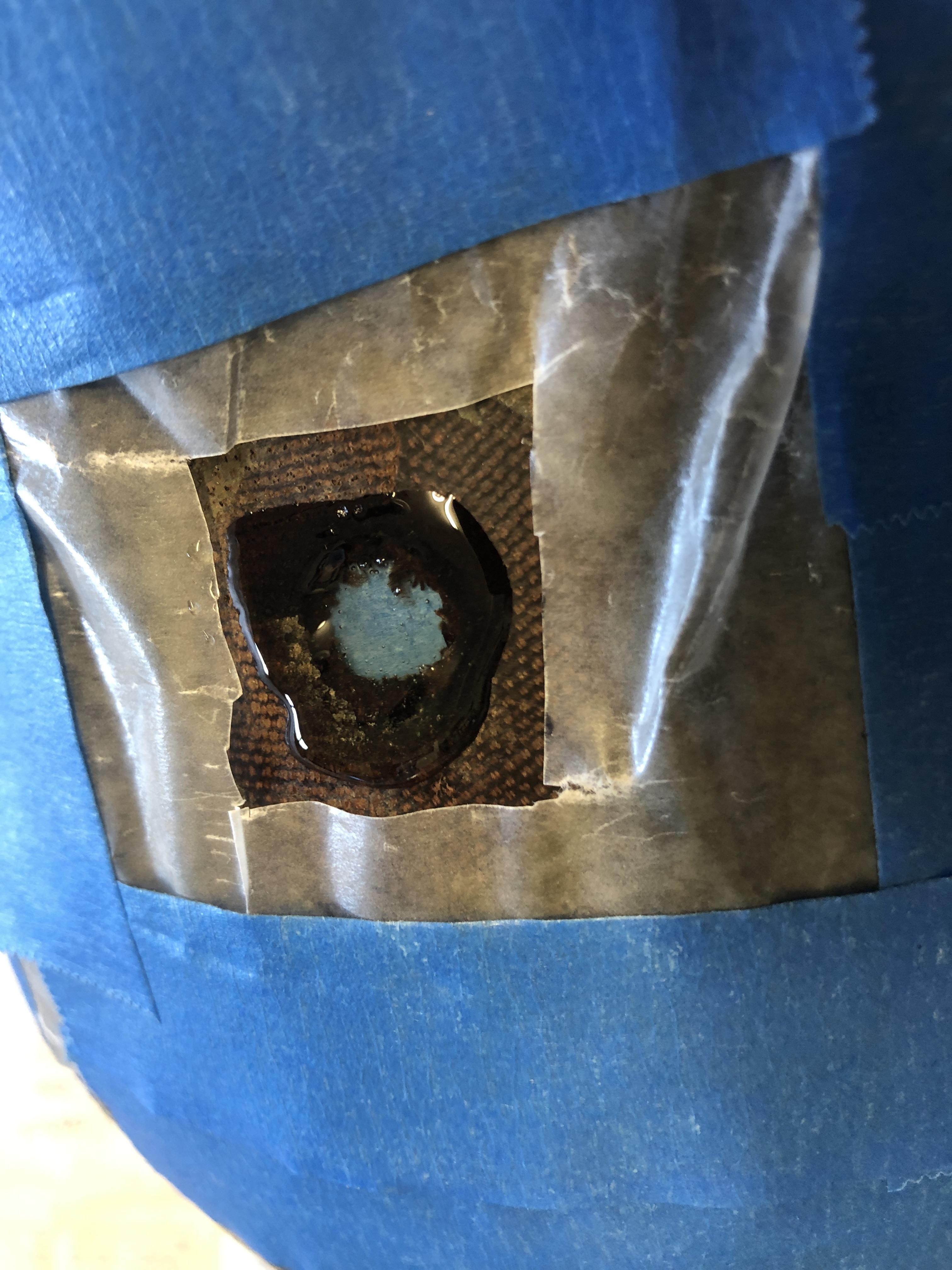 Doing it properly will be in the next post as this is probably long enough.

Once I had cleaned out the bad epoxy, I went to West Marine and my local hardware store and picked up the following supplies:
- A two-part syringe of Gorilla Glue epoxy
- A yard of four inch fiberglass tape from West Marine (that was the shortest length they could sell off the spool, and you never know when you might need some)
- The smallest, cheapest paint brush they had at Ace (synthetic handle and black bristles)

I also made myself a small pair of homemade tweezers to position the fiberglass into the hole easily and smoothly. To make them, I took two toothpicks, rolled up a small piece of paper between them, wrapped tape around the end with the paper, and finally took a small rubber band and got it around that end tight. Not a perfect solution, but it works well as a disposable item to put the fiberglass tape into the hole.

Next I set up my work area, using newspaper to protect the workbench. I prepared the liner shell by first mask-taping a piece of wax paper behind the hole tightly, to provide a backing for the fiberglass work. I then taped a bunch more wax paper around the front of the liner, to protect it as best I could. I got somewhat lazy this time around and used more tape than wax paper, which meant I had a slightly harder time getting it off and preparing to clean up the repair. More on that later.

Once the liner was prepared, I first cut four fiberglass squares in roughly the same size, and slightly larger than the hole. Fiberglass is nasty stuff to work with and does not cut easily (it frays and gets everywhere), so be mindful of that. Once I had the squares set aside, I squirted out some epoxy and mixed it up using the popsicle stick provided.

I started by applying a base layer of epoxy in the hole, and then, using my tweezers, pushed in the first layer of fiberglass. Once it was in, I took the paint brush, got some epoxy on it, and brushed over the tape. I repeated this process for the next three pieces, so it had four layers of tape in the hole. If you can, you want to get the grains going in different directions, as that provides more strength with the tape. Once the last layer was on, I brushed on a little more epoxy, set it up to dry vertically, and left it for 24 hours. I got a little overeager here and removed the wax paper backing after a few hours, but in hindsight should have waited the full 24. 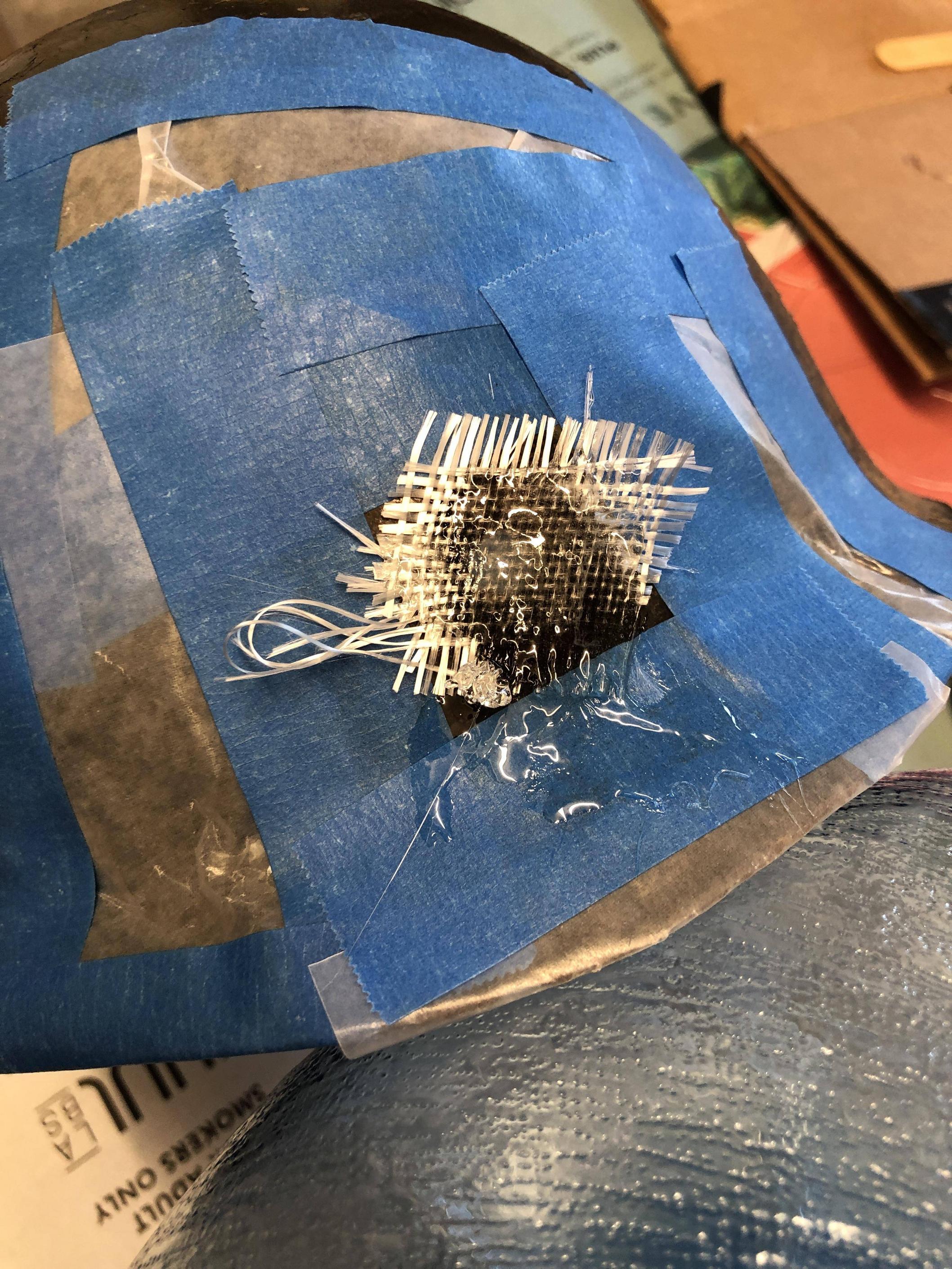 A day later, I went and removed the masking tape and wax paper. Since I was lazy like I said, epoxy had dried over the tape, which just meant I had to be more surgical in removing it and use an exacto knife to cut through to the tape. Once I had all the masking off, I began cleaning up excess fiberglass with the knife. Once I had it down to just hardened tape, I began slowly trimming and paring it with the knife. Be careful not to slip on this part, as you could easily cut your hand or damage the liner exterior. Unfortunately I slipped a few times and carved some lines into it as you will see, which is too bad as I plan on keeping the original paint on the liner and inside my shell as a secret inner history layer between the repainted shell and re-webbed liner.

It was at this point I discovered the back side of the repair had developed an air pocket, possibly when I removed the wax paper too early. Fortunately, since it was open to the back, I simply took some crazy glue, filled the hole, smoothed it over with a toothpick, and waited a day for it to set.

After it dried, I returned to cleaning up the fiberglass. Once I had it trimmed down as much as I safely could, I broke out some 180 grit sandpaper and slowly sanded down the front and back, trying to avoid contacting the liner shell itself as much as possible. Once I had it flush on both sides, I hit the surrounding area with glass cleaner and WD40 to make the difference less noticeable. After that was done, to mask the clear epoxy/fiberglass repair, I colored both sides with brown Sharpie to match the surroundings.

I think I took these two before I cleaned the surrounding shell up, but you get the idea: 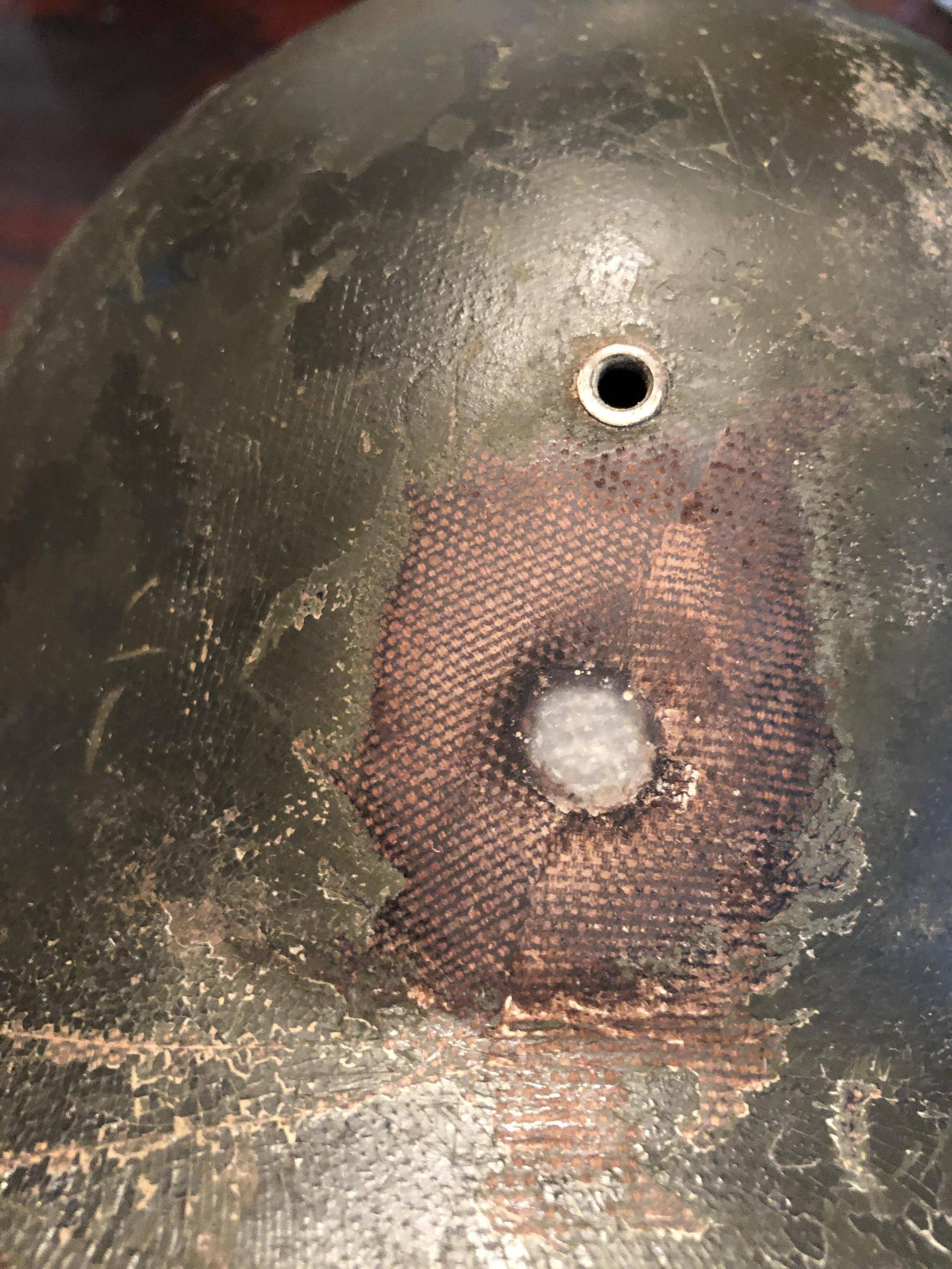 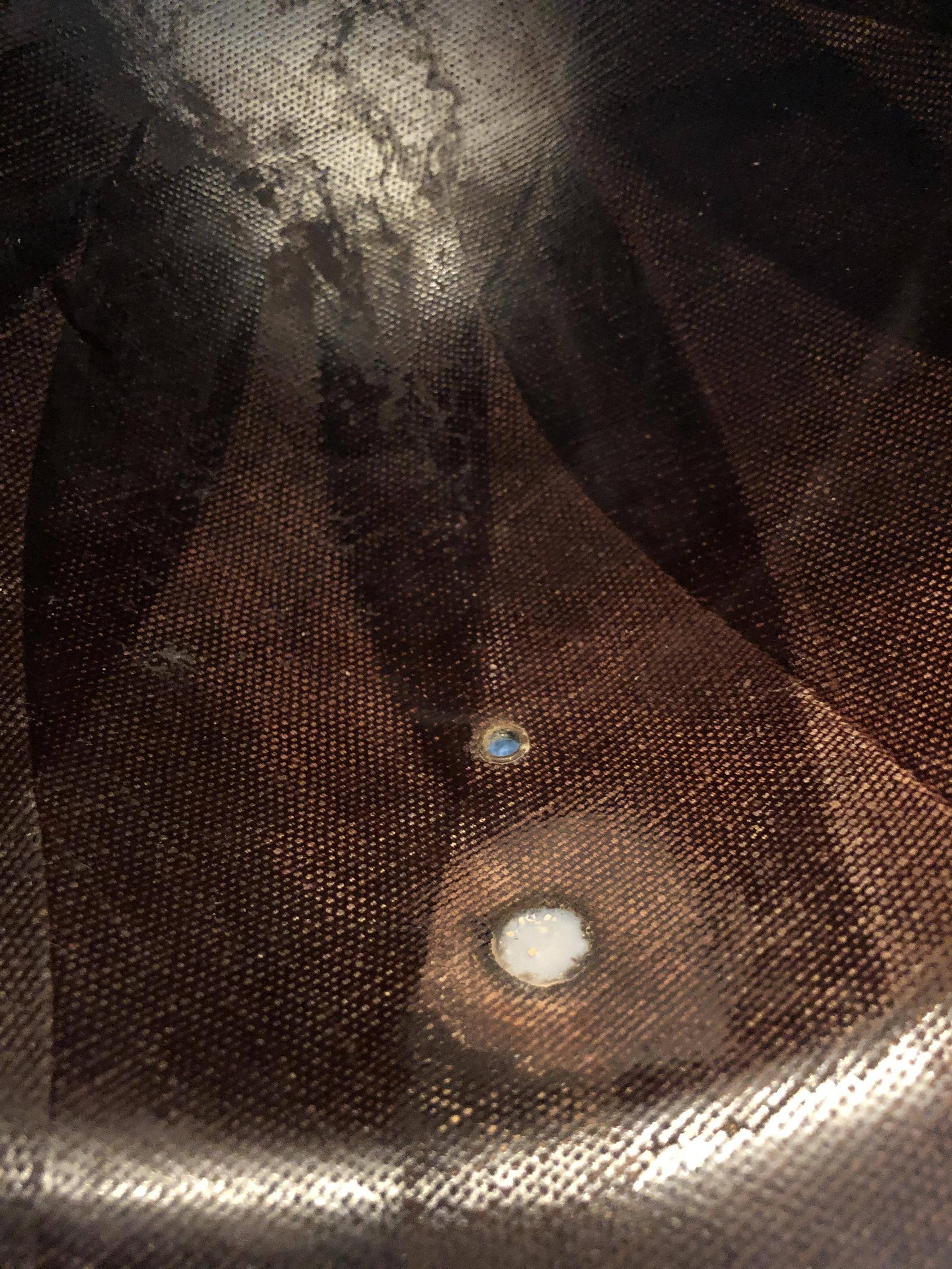 After cleaning up and some coloring in: 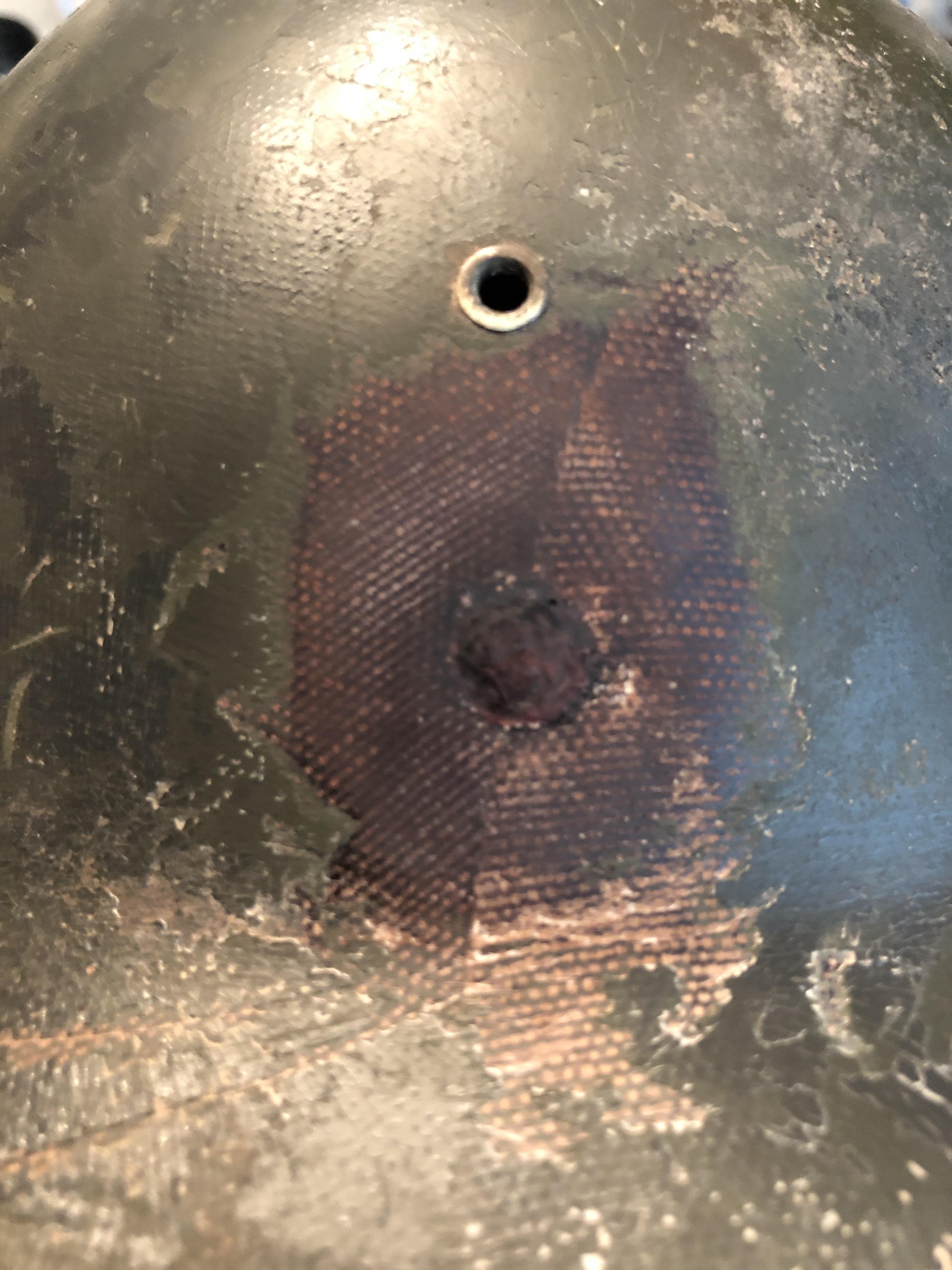 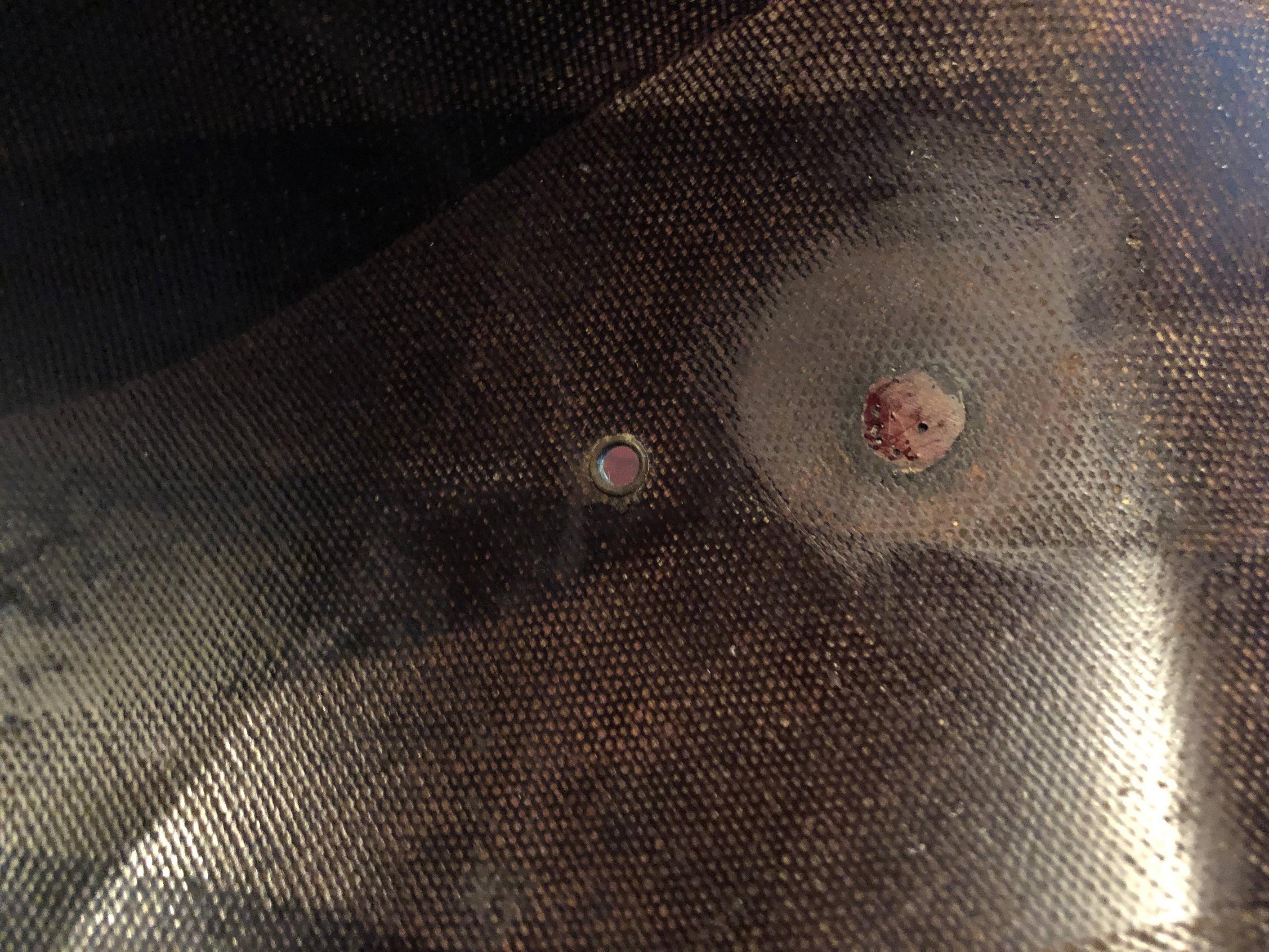 At this point, I was pretty scared of trying to drill the rivet hole. I plan on sending it to J. Murray for webbing installation, as I would rather have it done right and not buy the rivet tool with this being my only foreseeable restoration. I was going to have him drill the new hole, but woke up this morning feeling brave and decided I would see this thing through.

I grabbed an intact liner, and took a pencil compass. I put the pencil end to fill the insignia hole, and put the sharp end in the center of the front rivet to exactly measure the distance between the two. I then took it and used the sharp end to mark the center in my repair job.

Using a scrap piece of wood extremely carefully to back my repair on the inside of the shell, I started with the smallest drill bit in my set to SLOWLY drill a pilot hole. It went through pretty easily, but slowness is of the essence to avoid any damage. I then worked my way up through my drill bits up to the proper size of the intact holes, which I believe was 5/32. Once that was done, I stopped holding my breath, colored the inside of the hole with brown Sharpie to be thorough, and now it will go out for new webbing once my shell is painted and ready for chinstraps to be sewn on (sending them together).

Hope this is useful! 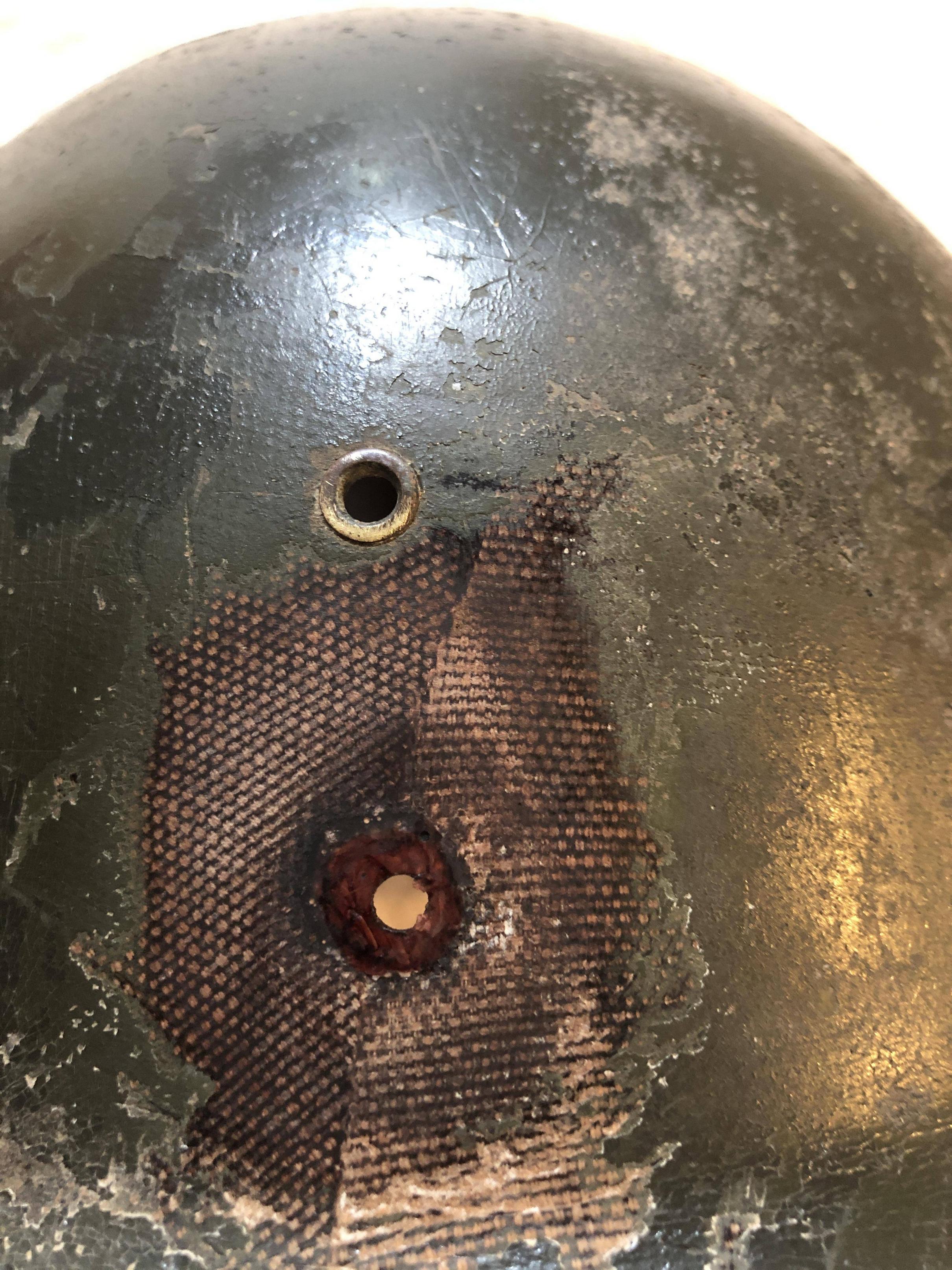 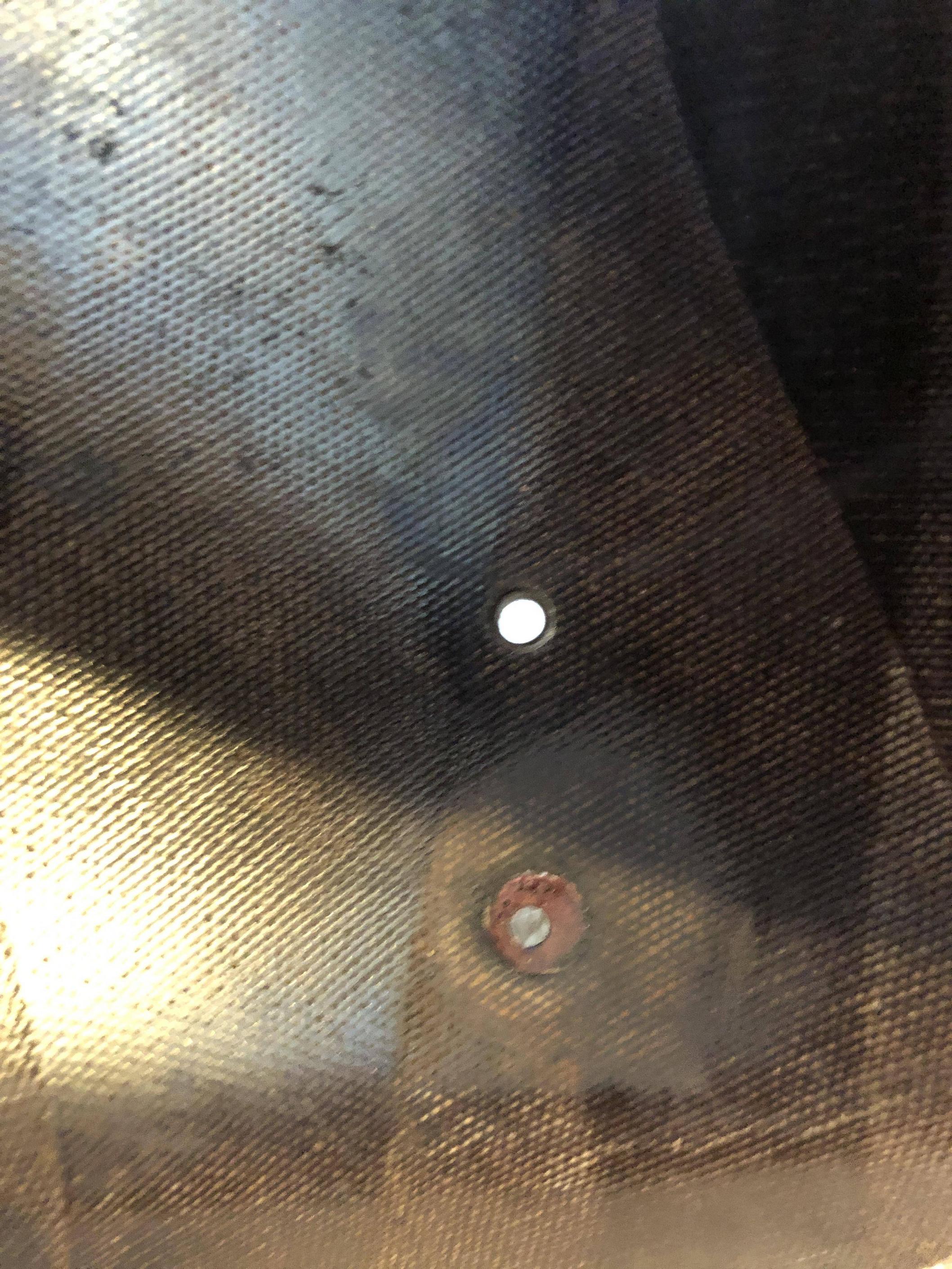