19 replies to this topic

I thought the Forum members might like to see a display of flame thrower equipment which was set up at a Washington Arms Collectors show a year ago. The club was encouraging displays to usher their show into a new building at the Fairgrounds in Puyallup, Washington, so I thougth I'd present something different and not commonly seen at a gun show.

The display consisted of my USMC manikin with P42 camo carrying an early M1A1 flame thrower. On the table next to him is the original packing chest for the M1A1 and a scarce assistant gunner's knapsack filled with extra nitrogen and hydrogen bottles. 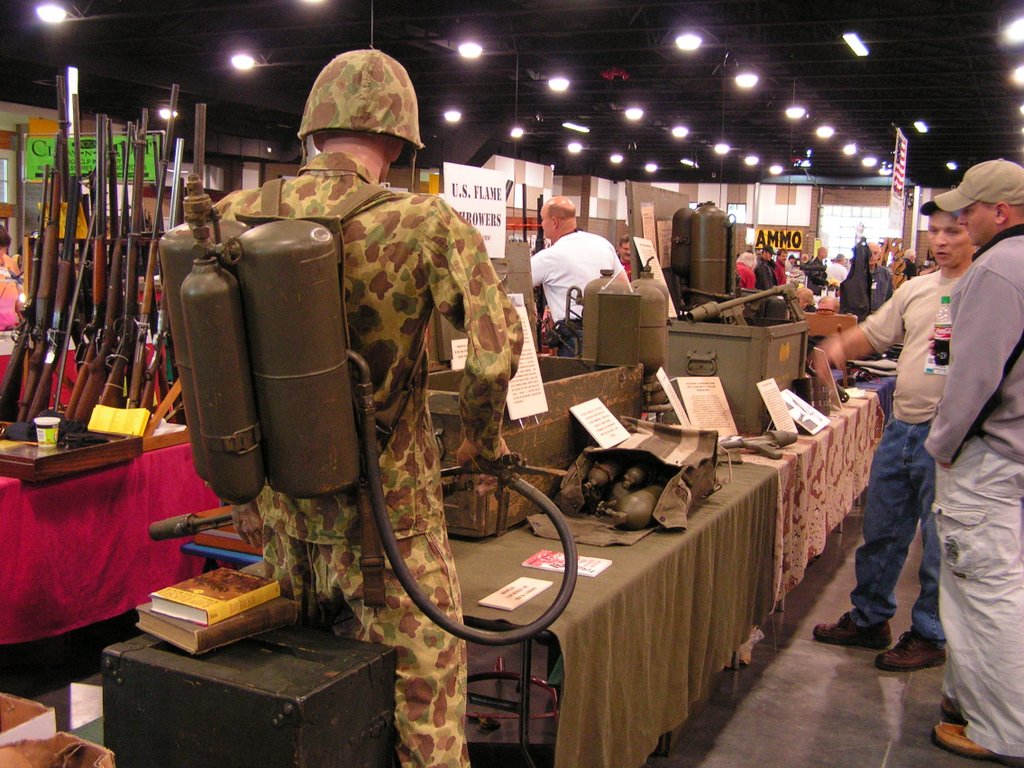 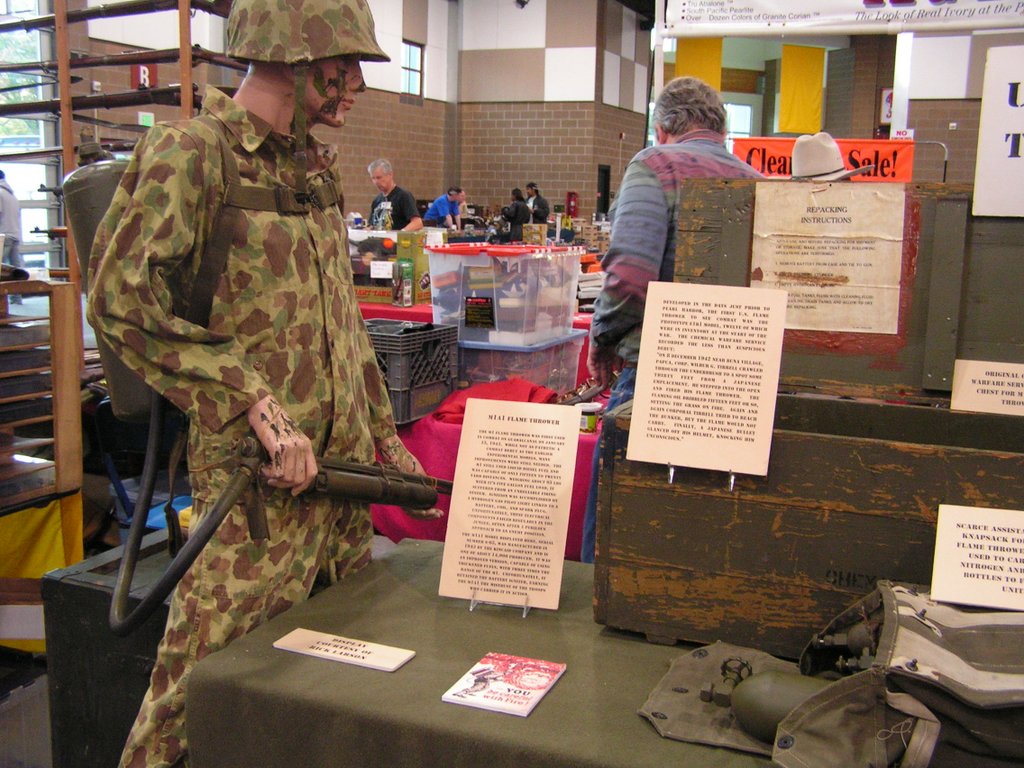 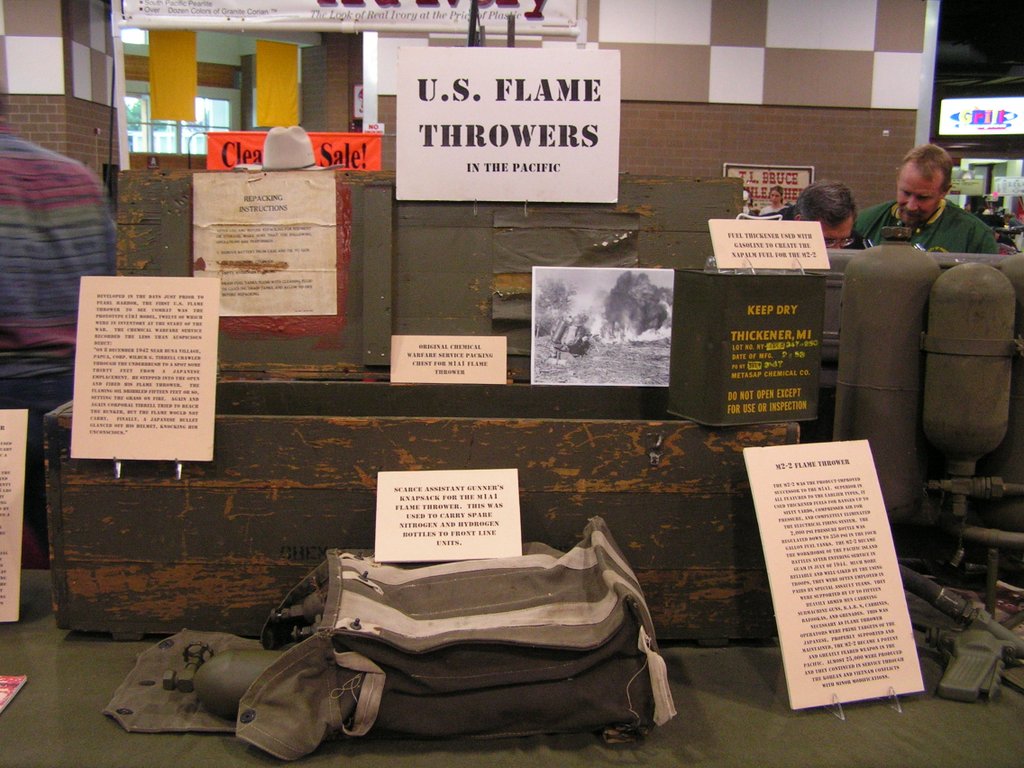 To the right of this equipment was a M2-2 flame thrower set, a can of M1 fuel thickener, several cans of ignition matches, and a couple flame thrower tool rolls. Though it's hard to see in the photo, the fuel tank group has the early hex filler caps with pressure relief valve and bent pipe to direct venting fuel away from the operator. 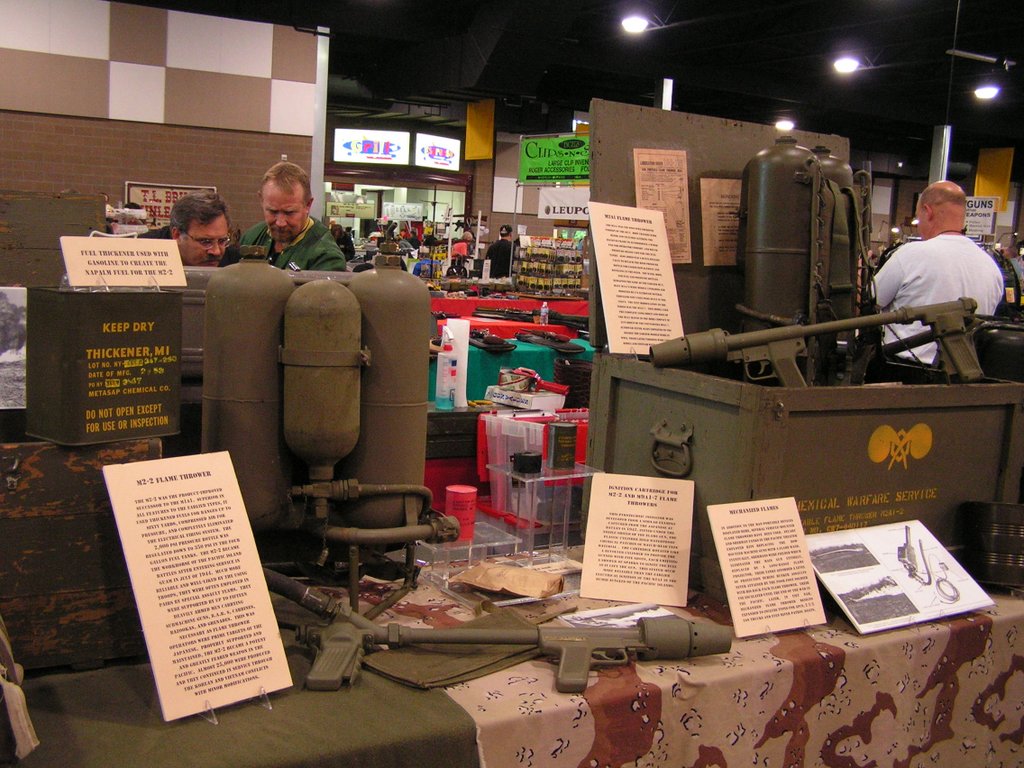 Next in line was a Korean war vintage M2A1 set with original packing chest, and in front of it, a Vietnam-era can of M4 thickener. To its right was a USMC Vietnam period M9A1-7 flame thrower with its short M7 wand assembly. 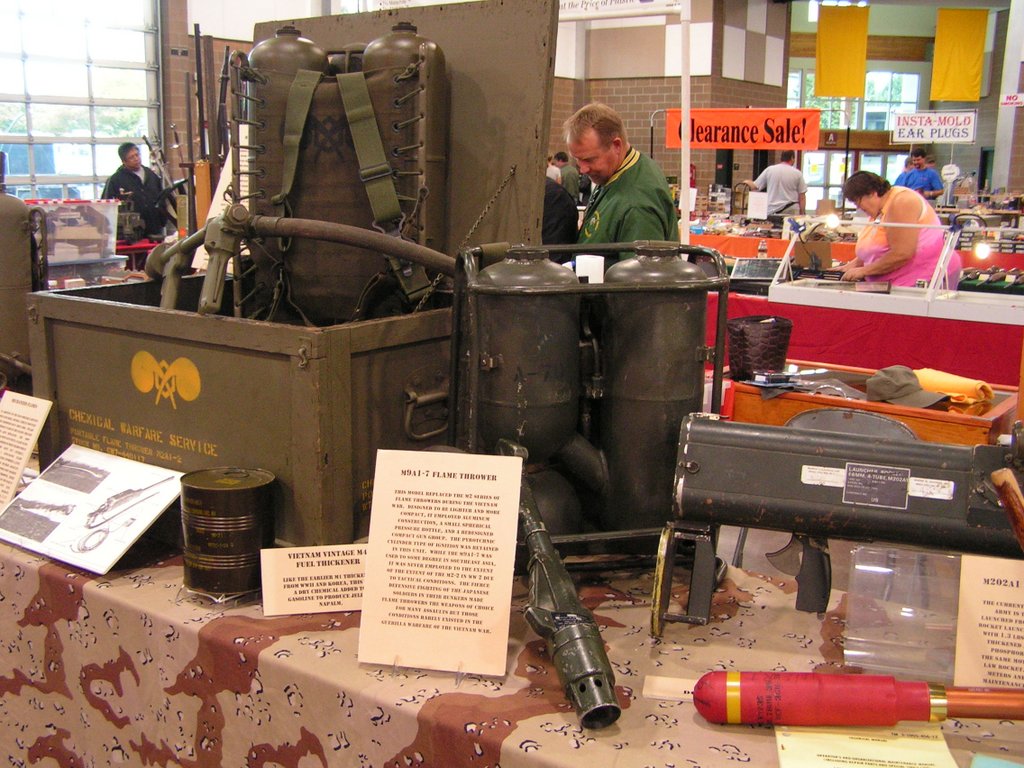 Rounding out the display was the last flame projector in U.S. service, an M202A1 4-shot rocket laucher with an M74 TPA filled flame rocket. 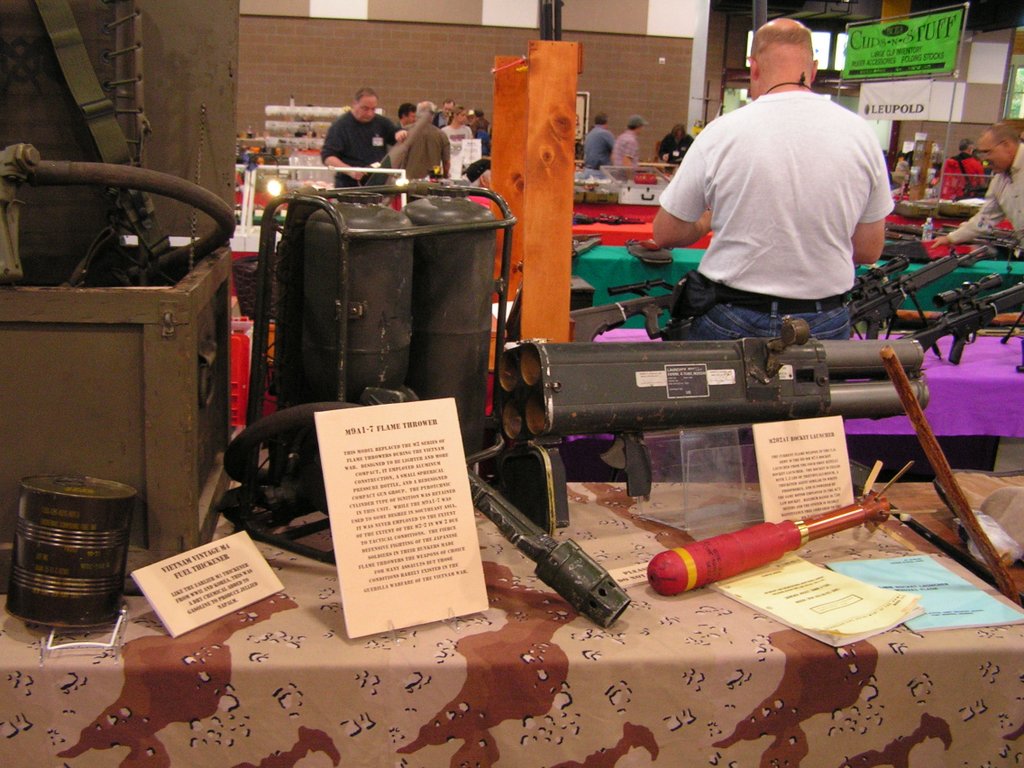 It was a fun display to set up and man for the weekend as most visitors who stopped to chat had never even seen a flame thrower outside the movies, and certainly never at a gun show. Like all well planned events (by me at least) it was not without its share of mishaps. The show was 150 miles from home and I managed to forget several accessories, such as original TMs that I'd planned to display. The best part was forgetting the right arm of the manikin, an oversight that had me building one late at night out of 2X2s and screws bought at a Home Depot at the last minute. Still a lot of fun to get out things that had been packed away for years and build a comprehensive display that was well received by the gun show crowd.

I'm afraid the flame thrower is finished for good as a weapon in the U.S. arsenal as it would certainly be considered a very un-PC device in modern times. Can you imagine how a CNN camera crew would portray American troops using a flame thrower in Iraq? There was criticism of their use against Japanese troops in WWII in some circles, but certainly nothing like it would be depicted and criticized today.

Wow! Amazing display!! Thanks for sharing!!

Welcome to the forum.

That is one super first posting! Very nice!

Welcome to the forum. That is one super first posting! Very nice!

Ditto I doubt of you could ever assemble another collection like that. Flame thrower parts are scarce.

Hi Ordnance whats the difference in nozzles on the wand compared to war time and post war models. Looking at your fantastic collection there seems to be two types.

excellent display! I didnt think they allow photos inside gunshows? every show Ive been to says no cameras, no pictures allowed, etc.

Quite an impressive display!
I would have thought the assistant would carry a fire extinguisher!
Sorry, Bad joke!
I missed out on a WWII era one a couple of years ago, it sold for about $8-900, too rich for my blood! I had already spent several hundred at that sale.
BKW

Welcome to the forum.

That is one super first posting! Very nice!

Yep thats a good way to get some street cred on the forum! http://www.usmilitar...tyle_emoticons/default/thumbsup.gif

Just noticed this thread percolated to the top again. First, thanks to all for the kind comments.

To BC312.... The nozzles on the M2-2 wand and the post-war M2A1 wand are the same pressed sheet steel type. In fact, the gun groups are virtually identical except for the data plates. The later M7 wand, in use from the late 1950s until the 1980s, is much shorter overall and used an aluminum die cast nozzle shield. Internally, it still used the same spring winder case and donut type ignition cartridge used in the previous two types.

Bolo, Yes, they really don't allow cameras at this show either but I bend the rules occasionally, Hey, I collect flame throwers and ordnance and that's not exactly normal, right? Anyway, the rule is primarily in place to prevent people from taking unwanted photos of other people and gun collections at the show. I was only photographing my own display to have a record of how it looked. I really did want to snap some other pictures as there were many nice displays that weekend, but I resisted.

Brian, You missed out on a real deal at $800-$900 if that flame thrower was reasonably complete. They have become very scarce in recent years with prices running closer to $8-$9 thousand than $8-$9 hundred. But I do appreciate that comment about the assistand gunner carrying a fire extinguisher. I think that's what I'd like my assistant to carry along with a change of Nomex underwear. In reality, during the latter half of WWII after flame thrower assault doctine had evolved a bit, what the assistants and other members of the assault team actually carried was.....firepower. The flame thrower gunner was a prime target and his support team was armed with BARs, Thompsons, and whatever other heavy weapons they could find to help suppress enemy fire as the flame thrower operator got into position for his shot at the target. Very intense combat techniques.

The last type of flame thrower developed late in the war consisted of a two-piece take down wand about 8 feet long, a couple hundred feet of hose, and a manifold system that could join as many as 6 backpack tank groups. The idea was to allow the gunner to crawl up slowly toward the target dragging the fuel hose behind him, but without the target of those big fuel tanks rocking back and forth on his back and drawing fire. I'm sure the operators appreciated being a lower profile target on the battlefield together with the added firepower of 6 times as much fuel.

mpguy80/08, The M202 launchers are seen occasionally on the collectors market but need a bit of mild demilling as they are a reloadable launcher. What are scarce are the 4-rd clips and inert rockets. I've never actually seen one of them fired but they tell me the results are still reasonably impressive. For reasons of simplicity and ease of field maintenance, it's easy to see why they moved away from the heavy and messy old school flame throwers in favor of a rocket system. But they also lost the tactics of the "garden hose" method of assaulting a pill box opening or similar target. I'm certain it's not as easy to get a rocket into a narrow slit as an adjustable stream of fire.

Ordnance, any chance of some close up pics of the m1a1 wand and nitrogen/hydrogen bottles. I have the remnants of one of the dummy ones from saving private ryan and want to fabricate a few parts.

"I'm afraid the flame thrower is finished for good as a weapon in the U.S. arsenal as it would certainly be considered a very un-PC device in modern times. Can you imagine how a CNN camera crew would portray American troops using a flame thrower in Iraq? There was criticism of their use against Japanese troops in WWII in some circles, but certainly nothing like it would be depicted and criticized today".

Precisely my thoughts on this awesome weapon! The troops can't even question a suspected terrorist in Iraq without being chastized and hamstrung for doing so. You have a very nice collection and I am very envious! :thumbsup:

Hi Ordnance, have you or anyone else ever seen one of these on a uniform at all. :think:

Where has this thread been hiding??!!??

How many Flame Thrower displays of this caliber are there, anywhere?? I could spend an hour or more checking that one out :thumbsup: :thumbsup: Not to mention those camos- '42s, no less...!!

Too bad the "humanitarians" bird-dogging our G.I.s are so "culturally sensitive" of live beheadings and other such things- they'd have their hands full with truly worthwhile persuits, rather than persecuting their own protectors for self-aggrandizement.

Ordnance- thanks for sharing that first-class project!

Hi Ordnance, have you or anyone else ever seen one of these on a uniform at all. :think:

Ken, I'm unfamiliar with that particular patch but it looks like the size worn under an Armor patch. It is probably for flame thrower tanks rather than the back pack models.

Please post this in the Shoulder Sleeve Insignia section as well. That should get a responce.

Awesome display! I will have to say that in all of my years going to gun shows I have never seen anything as complete as this.

By the way, the only complaints I have ever heard from vets on the flamethrower was that you had to really brace yourself or they would knock you over!

WOW, very nice display, I have never seen anything like that.

Back to FLAMETHROWERS [REF]