Thank you Ryan for posting all the photographs! And thank you to Bob for letting you photograph them!

Not the fanciest buckle (Post #201 Philippines 1945, John M. Beck) of those just posted, but I have the "brother" (perhaps literally) buckle for Geralo E. Beck, Manila P.I. 1945.  Somewhat amazing how internet can bring things together again.

Salvage Sailor - Thanks for setting me straight on a couple of those buckles!

PhilippineBuckles - That is quite the coincidence on the buckles that both you and Bob have.  That would be crazy if the two guys were brothers.  I've seen a few other brass toned Philippines buckles on my Worthpoint searches.  They definite seem to be rarer than the others.  Pretty cool.

Regarding the photos from VINTAGEPRODUCTIONS I only photographed about half of what he has in stock and mostly the earlier ones.

Here's the temporary buckle arrangement I have going until the display rack comes in.  One mistake I made on a couple of the buckles that I wouldn't do again was polishing them to a high luster.  I did it on 3 or 4 of the buckles using metal polish, but in doing so you loose that brassy flash rust highlighting in the background and dulled down patina in the foreground.  You definitely see the details better unpolished and you keep the pieces most original as well.  Learn from my mistake.  Never again!

Awesome collection V!  Thanks for taking the time to post them.

Trenchbuff & Hink441 - Thanks for the kind words and you're most welcome.  I'm constantly on the hunt for these buckles as I'm sure you guys are.  Other than Ebay, Vintage Productions, and Flying Tiger Antiques I haven't really been able to locate these buckles at any local flea markets.  I'm assuming Militaria shows or flea markets could have them but I have been only really been finding them online to date or at Vintage Productions warehouse showroom in Huntington Beach, CA.  Happy hunting and collecting!!!  Ryan

Here's a real unique one.  This picture came from Worthpoint but I can't recall ever seeing a Philippines Railroad related GI belt buckle like this one,  Very cool indeed!

@vforvictory1945 -- Hey Ryan, your collection looks real nice as displayed!  I'm glad you learned your lesson about not aggressively trying to clean or polish any more buckles.  The only thing I do is sometimes is to use hawthorns to pick off any contaminates that are stuck in the engravings -- hawthorns (nature's wooden toothpick) won't scratch / damage the metal.  I will also sometimes dip q-tips in acetone and then wipe off organic contaminates.

Gift buckles are kind of neat as they show that sailors & soldiers appreciated the skill of Philippine buckle engravers as well as reminding us how they were thinking about loved ones back home.

In terms of RR buckles, here is a picture of an undated Manila Railroad buckle which has an engraved train engine  (BTW it looks like someone polished this buckle at some point).

@PhilippineBuckles - Bill, thankfully when I did the polishing it was just with some metal polish and a microfiber cloth so there wasn't any damage or swirling, but just loss of patina.  I do like your toothpick or acetone idea though as I have a few buckles with some old gunk on them that could come off though I would like to keep the rest of the patina.

That Manila Railroad buckle is pretty cool .  I saw that on Worthpoint a while back.  I wonder who owns those two Railroad buckles as they are very unique and cool.

The level of skill and detail work on the Philippines buckles, especially the pre 1960's examples that have nearly the entire surface area covered with some sort of engraving, are quite fascinating.  Its even more amazing given the size of these buckles, as it seems they are in the 1-3/8" x 2-1/2" range mostly, so the craftsman had to hammer everything out in such a small area.  I definitely have a great respect for the craftsmanship involved in these buckles.  I wonder what the average labor hour allotment was for the average belt buckle?  No clue.

Here's one I just added. Got it off of ebay and it was listed in as "vintage theater" Name of "ASH".

When I was in the Navy in the mid 1980s I had this made in Olongapo, PI.  Wore it on the ship for several years.  I didn't realize the tradition went back to WWII, but I'm glad I had it made (overnight if I recall). 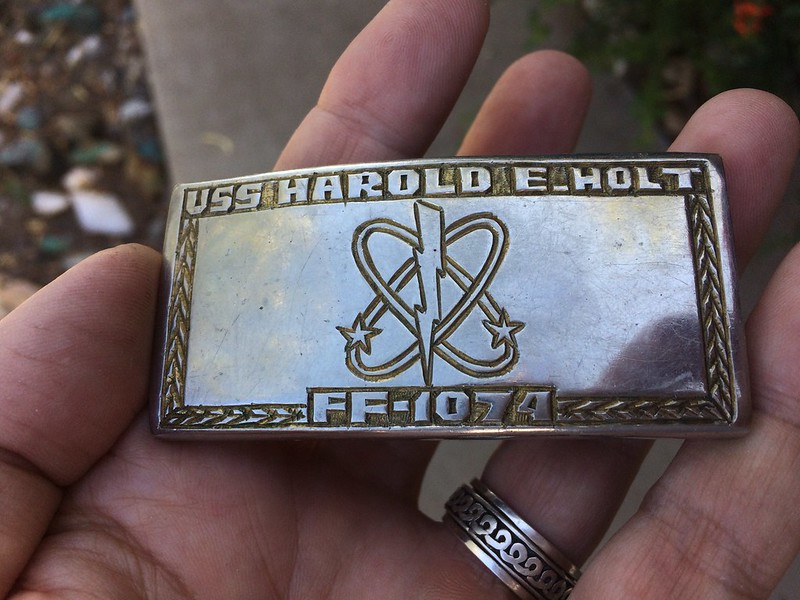 USN Patrol Squadron Four (VP-4) stationed in Naha, Okinawa, Japan circa 1956.  The squadron flew reconnaissance and Anti-submarine Warfare (AWA) missions to counter the Communist threat to the islands of Matsu and Quemoy.  (Source:  Squadron History - The Skinny Dragons).  My guess is this buckle is in the 1956 - 1959 range.  I believe the rank is Aviation Electronics Technician but please correct me if I'm wrong.

So now that I've seen these, I have been gathering a "few" myself. Never know something exists and then they start popping up all over the place. Here is a grouping of 9 that I got on an ebay deal.

They're nothing special, except for the USS Missouri one (it was marked as "sample"). Found out he is a retired Navy Chief who is cleaning out his stuff and quitting selling so he can go fishing. He told me his wife had a shop out side of one the Florida Naval Bases and they were purchased and shipped from the big PI back in the 80's. Even though they are modern and not named, I still think they are cool. Just another rabbit hole to toss money at.

They each came sealed in the original cellophane wrapper. I got the last of his singles but understand he still has Air Warefare ones left.

@easterneagle87 -- Nice grouping.  Thanks for posting.  I personally like the F-14 & F-18 ones the best.  Could you please post a close up of the USS Missouri buckle? I'd like to see what is engraved on the bottom line.

Just a note that this thread now has over 50,000 views -- thank you everyone for reading and contributing!

Although you might not find the following buckle very exciting, it is only the second plain (non-engraved) Philippines buckle I've come across. The back clasp with the home-plate shaped opening is what identifies it as a Philippines buckle and dates it to circa 1945.  That said, what is different about this buckle is that it is a brass rather than the gray metal of most of the engraved buckles.

The bottom line on the Missouri buckle says "BB-63".

In response to Bill's last post about the brass baseball diamond belt buckle I just picked this one up.  Its the only buckle I own with the diamond backing true and true brass tone.  It seems on some of the other buckles they are either chrome plated over brass or some type of silver metal and when the silver metal is engraved the newly carved metal rusts slightly to produce the golden huge.  I'm not sure though as this is only a guess.  This is my conclusion though as when I polished a few buckles a month or so ago the polishing removed the brass tone so I suspect that it was just surface rust?  That's my best guess.

The bottom line on the Missouri buckle says "BB-63".

Here's a shot of the Mighty Mo engraving