5 replies to this topic

There is a group of men who remember November 11 for another reason.  They are the survivors of the torpedoing of the SS CAPE SAN JUAN on November 11, 1943.  The transport (USAT 1441) was approximately 300 miles south of Fiji when it was struck by a torpedo from the Japanese sub I-21.  Although initially struck at 0530, the ship did not go down until the next day.  Damage from the torpedo and subsequent shelling from US rescue ships finally sent her to the bottom.

The SS CAPE SAN JUAN was carrying 1464 passengers and crew.  The majority of the passengers were men of the 1st Fighter Control Squadron, the 855th Engineer Aviation Battalion, and the 253rd Ordnance Maintenance Company.  Casualties from the initial torpedo hit, resultant fire, drowning, and shark attacks totaled 117.  Men were rescued by a number of ships and smaller craft, as well as a flying boat.

This first grouping (although only two notes shown) belonged to one of the survivors.  The dollar bill is marked "Torpedo Survive" (sic) and "Nov. 11, 1943 Cape San Juan."  The five franc note is similarly marked "Torpedo Club."  There are a total of seven bank notes in the collection signed by most of the officers of the three named units.

This second grouping belonged to another survivor, T/5 Leyon M. Paluch.  He was a member of the 253rd Ordnance Maintenance Company.  The collection includes his "shellback" card dated five days before the torpedoing, an oil-soaked dollar bill marked to commemorate the event, a booklet of poems telling the story of the voyage and sinking, and a late-war photo.  The artist, K.K. Hunt, who did the cover of the poems, is the one who did the art work on the dollar bill.  According to the daughter of another survivor, and who has her father's dollar, the men resorted to using the paper money they had on them to wipe the oil from their eyes.  Note, also, the "shellback" card is stained by oil.

just like to say the Sargent LEYON PALUCH has pass away on april 16 of 2015 he lived in Vulcan Michigan , I saw that he was on san jaun when it was sunk and I looked it up and came to this page, so I joined to make this  post .small world when you start to look things up

Hey Siege, thanks for Sharing this. Here's a GCM to a survivor of the attack. After the war he was a Health Inspector for the state of Maryland in city of Baltimore. In the late 70s he and another veteran (Clarence Boatman) organized reunions for the other survivors. 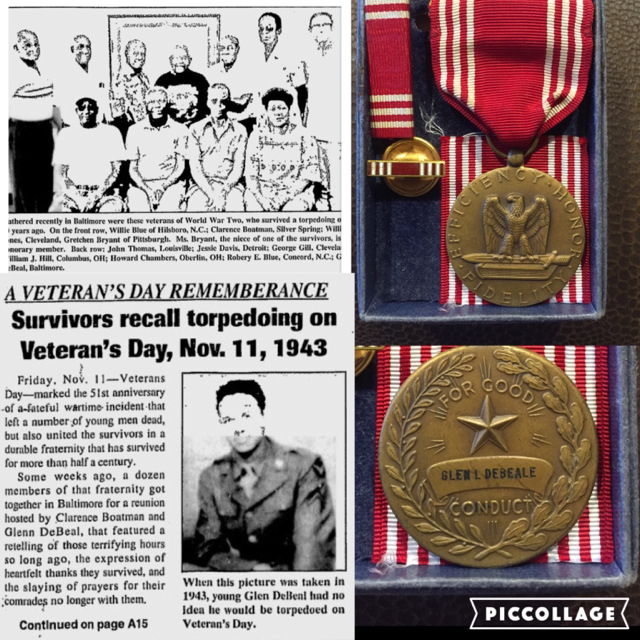